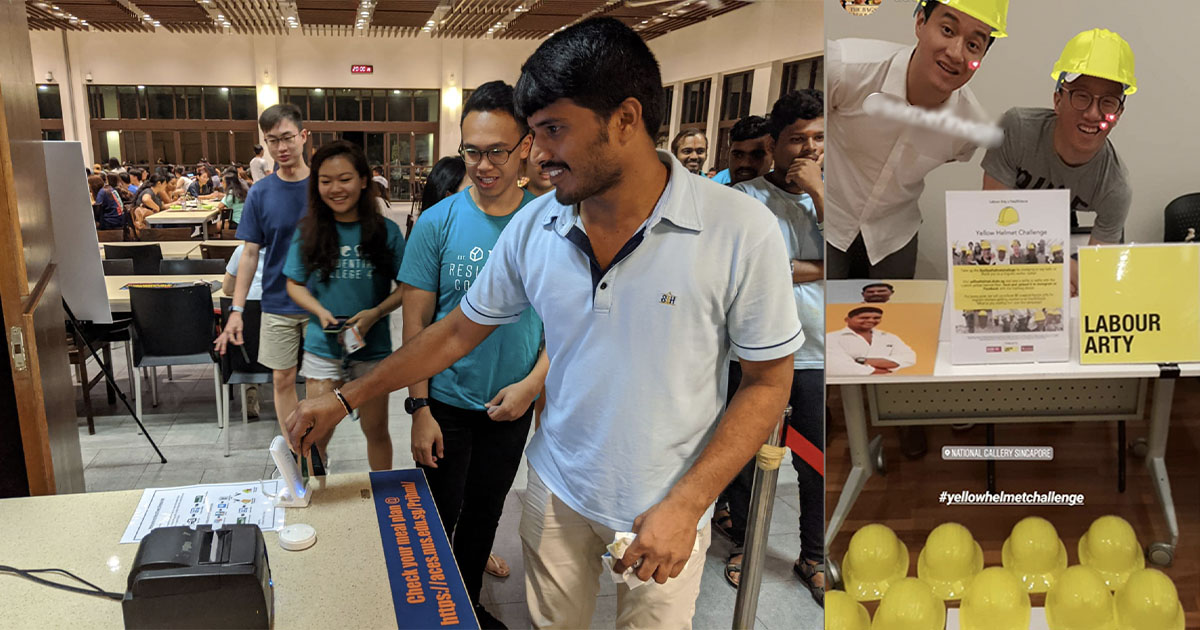 ‘Made in China’, but Singaporean.

For 30-year-old Ou Ningfei, who migrated to Singapore with his family when he was 7, this puts him in a spot where he was, in a way, stuck between two cultures.

Being a foreigner meant being an ‘outsider’ in a land foreign to him, and some of the things he experienced back then include being treated with prejudice, or “they would start to interact with you lesser because they see that you’re from another place.”

Such ostracising and marginalising behaviours towards migrants are ubiquitous, but it is also exactly that that often makes our society forget empathy.

Fortunately, those experiences only pushed Ningfei to pick up on the nuances of the local culture more quickly. And today, his identity as Singaporean is no less than any other born-and-bred locals, for he has spent almost this entire life here and also fulfilled the service of every Singaporean son.

However, for many other immigrants who come to Singapore in search for better livelihoods, the privilege of being accepted by society may not exist.

Marginalisation in the Migrant Worker Space

Besides personal experiences, Ningfei also had his share of interaction with migrants and the hardship that they face. His parents were migrant workers themselves and his mother, a regular volunteer at church events that support migrant workers.

“I’ve seen the spaces that [migrant workers] occupy, the issues that they face, physically and socially. And many times, they get exploited in so many ways.”

Migrant workers lack privilege and power of influence in a foreign society, making them more susceptible to being taken advantage of by errant employers.

“There are so many stories that are so hard to hear, so painful,” Ningfei added, as he shared about migrant workers who end up with injuries or even permanent impairment caused by their work, as well as the exorbitant agent fees and low salaries.

In an interview with another publication, Ningfei shared that some workers pay “as much as $3,000 SGD to $15,000 SGD to their agents in home countries like India and Bangladesh.”

Once, at a gathering he and his mother were helping out at, Ningfei met a Chinese migrant worker who was forced to do OT for 2 weeks straight without remuneration. Seeing that the worker had come at almost 10pm to collect the packet of Cai Png for dinner, Ningfei spoke to him to understand why.

Describing the grease, grime, and blisters that marked the worker’s arms and hands, Ningfei recalled, “You can tell how hungry and tired he was. He was crying and telling me how he hasn’t gone home for a long time. And I realised how even though we were around the same age, we lead such different lives.”

“You look at people like him, and you know that there’s really a lot of things you can do for the underprivileged.”

After having helped out at many welfare support events for migrant workers together with his mother, Ningfei decided to do more on his own.

In 2018, he started Labour Arty, a ground-up initiative that leverages various mediums like photography and digital media to promote appreciation and awareness for migrant workers in Singapore.

“The genesis of this is that I’m Singaporean but I’m from China. My parents are migrants themselves, which is why my heart goes to migrant workers.”

With the support of friends, Labour Arty shot and launched their first project: A humble photography exhibition titled Blind Spots. It captured a sight familiar to all of us but often go unnoticed.

Since then, Labour Arty have gone on to launch several projects. These include the Tap4You project, which encouraged NUS students to share a meal with migrant workers, as well as the Yellow Helmet Challenge, one of their earlier works, which aimed at increasing the visibility of and appreciation for migrant workers.

Just recently over Chinese New Year, they also partnered with sponsors like Impossible Foods and Dumpling Darlings to organise a Dumpling Party for migrant workers who were affected by the travel restrictions arising from the COVID-19 situation.

Besides championing for the migrant workers, Labour Arty’s work is also a subtle approach at increasing social harmony in a community. This is especially important in Singapore, as our society is such a diverse conglomeration of different nationalities, races, and cultures.

“We try to change the perspectives people have of migrant workers. By increasing awareness amongst those who aren’t aware, and by making those who are aware be more ready to stand up, so that [migrant workers] don’t get exploited.”

Running An Initiative As An Individual

However, juggling full-time work and personal commitments on top of running a ground-up initiative comes with its share of challenges of course. For example, the lack of resources to do more.

Although Labour Arty has been fortunate to receive support from various parties and organisations including the National Volunteer and Philanthropy Centre, it is fully run by Ningfei and a team of like-minded friends on a volunteer-basis.

A full-time product and process manager himself, Ningfei explains the constraints they face in championing for change.

“It’s fun for friends to help out for one or two projects, but it’s tough to sustain an entire movement.”

However, the mission has always been very clear to him: Every little bit helps.

Citing several similar movements and initiatives like Migrant x Me and Sama Sama, he spoke about the inspiration he draws from them, as well as the sense of camaraderie in working towards a common cause.

He also emphasised the importance of collaboration and finding the right partners in achieving the mission, “good partners can give you support and help you spread the work you do.”

Do Something Close To Your Heart

Besides Labour Arty, Ningfei also co-founded another groundup last year. Aptly named codeToLove, the initiative helps other non-profits with their IT needs.

In some ways, codeToLove is also a passion project and one that allows him to help amplify the good that others do while practicing what he likes (designing and writing digital/UX content).

“If I am to be labouring, it better be for good, and to have some fun out of it,” he explains.

“If it’s purely meaningful but not fun, it’s going to be miserable. But if it’s fun but not meaningful, then it’s not going to mean much at the end of the day.”

And yes, at the end of the day, Ningfei’s motivation is something that many of us can relate to, which is a desire to derive meaning and enjoyment out of what we do. It can come from your job, or it can come from starting your own groundup, but what he said will ring in our ears for a long time to come: “Do something that’s close to your heart.

Start Your Own Groundup With Groundup Central!

Passionate about a social issue and wish to make a change, or keen to contribute towards a certain cause? Check out how you can get support from Groundup Central here!

(This article was written in collaboration with the National Volunteer & Philanthropy Centre.)

I Am ‘Gubak Kia’: This 25-Year-Old S’porean Left Restaurants For The Hawker Life
“I Never Thought I’d Get The Virus”: Account Of A 27-Year-Old COVID-19 Patient In S’pore
To Top