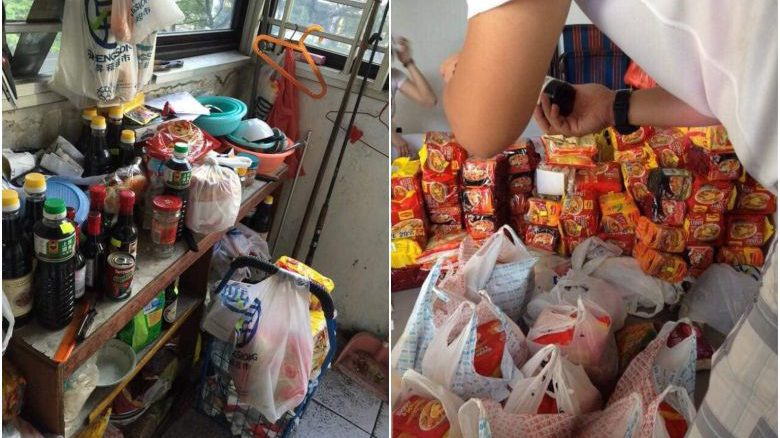 Is it your fault if you buy a gift for a friend, only to realise later that your friend has no use for the gift you bought?

In the case where hundreds of donated food supplies are left to waste in a poor, elderly person’s home, is it then the recipient’s fault for not consuming those foods, or the donors fault for giving the man supplies that he does not use?

A recent Straits Times feature shone the spotlight on the effectiveness of volunteer and social welfare efforts in addressing the needs of the poor. Although most of us probably don’t have access to the full (premium) story, the images were alarming enough.

It is hard to fathom that a 78-year-old man had “hundreds of instant noodle packets and more than 50 bottles of soy sauce stacked to the brim” of his one-room rental flat, despite those being donated goods from volunteers.

It painted a very ugly picture of social welfare efforts on the ground. And it was very easy for many to jump on the narrative that this is the result of lackadaisical efforts made by charities and social welfare groups who are just not doing enough.

I spoke to 28-year-old, Kevin. A full-time social worker who has been working with low-income families for close to five years, he attests that there are cases of mismatch between what’s donated and what the poor needs. Though, the mismatch has never reached that scale.

Social workers and volunteers often take into account feedback from their beneficiaries as well as their general observations, to determine the kind of supplies that goes into subsequent food distribution drives.

Although, for this to happen, “a lot lies in education, with the people we work with (beneficiaries) and also our volunteers.”

Why Baked Beans And Sardines?

This is exactly the question that Kevin, along with his colleagues at the voluntary welfare organisation (VWO) he worked with for more than three years, always aimed to answer. Not just as a reminder for themselves but to educate volunteers on the purpose of their actions.

‘Why are they giving out canned food?’

He explained quite matter-of-factly, that it is a matter of practicality. The long shelf-life of canned food, and ease of transportation and distribution are what makes it, and other foods like instant noodles and sauces, among common choices for food distribution exercises. This is especially so when many organisations have the heavy responsibility of rendering support to a large number of beneficiaries.

“It really depends on the extent of the help you want to achieve.”

Often, cases of mismatch happens when there’s a need to standardise food distribution packages. Standardised packages help organisations and volunteers achieve convenience and scale in distribution exercises—can you imagine the logistical nightmare of purchasing, packing, and delivering 1000 packages that are personalised to each beneficiary’s needs?

With that said, both Kevin and Yong Shin (a long-time volunteer with Youth Corps Singapore), shared that volunteers and social workers always try to have a better understanding of their beneficiaries’ needs.

Yong Shin: “We will usually conduct a needs analysis in the community we want to serve in to prevent wasting resources and [end up] not addressing the community’s needs.”

For example, in one of the projects that she worked on, the team switched from their initial plan of a food donation drive to a house-cleaning exercise after surveying and finding out that that was what the residents needed more

Kevin echoed these sentiments, “If it’s not [to achieve] scale, then we would always try to have a better understanding of their needs by creating a relationship, speaking to them.”

It Takes Two Hands To Clap

I’ve had the opportunity to meet and speak to many Singaporeans who are active in social work; full-time social workers, long-time youth volunteers, and also the occasional volunteers who participate in ad-hoc stints like home refreshing projects or donation drives. All of them tell the same tale, which is how they leave with memories of the interactions they had with beneficiaries. The bonds that they formed and the smiles of the people they worked to improve the lives of are what they will remember.

Which brings us back to the point of building relationships.

Giving is a good act, but the conversation needs to go both ways for social welfare efforts to work.

“The elderly should also feedback to us, but likewise, it’s always a constant check in. That’s why we always challenge volunteers [and ourselves] to open up our eyes and ears.”

“When seniors open up their homes, there are usually very telling signs of what they need. You look at how functional their kitchens are.”

Another way that Kevin often employs is asking his seniors how they settle their three meals.

“This is a very simple, conversational question that tells a lot,” because it helps him understand more about the senior’s lifestyle and how to complement that lifestyle.

For example, it was only after getting to know a Malay family better when Kevin realised that the healthier olive oil that the team has been giving them wasn’t ideal. Instead, what the family needed was something they can use for frying, which is actually a cheaper, vegetable oil.

“We try to make decisions for them by putting ourselves in their shoes,” Kevin said, “but just imagine how it feels like if someone else does your grocery shopping for you.”

After working with low-income families for five years, Kevin also shared that many of these people have better budgeting skills than we give them credit for. Most of them prefer to get their meals from the coffeeshop, simply because the $3.50 economic rice is more cost-efficient than the gas, water, and amount of resources they would use just to cook one meal for one person. This also means that for some beneficiaries, even food supplies like rice or fresh produce would do no good for them.

Again, Kevin stressed that even though social workers try to make the effort to understand the needs, the fact of the matter is that they are often too overwhelmed by the scale of work that they do not have enough time to have such quality conversations with everyone, all the time.

At the end of the day, it is a conversation that can only happen if it is embraced by both sides.

The biggest disconnect is when this conversation doesn’t even happen.

The Importance Of Conversations

Take for instance Meals on Wheels—a service that many has suggested under the comments section of Straits Times’ Facebook post.

Through the conversation with Kevin, I understand that there are many seniors who are covered by this service, but “if you ask these seniors, many of them are not great fans of the food.”

“It’s a great service, but the disconnect happens when their dinner is being dropped off at their doorstep at 3pm.”

Without the human interaction, what is supposedly a very noble and practical help for the needy or elderly becomes a cold service. It becomes nothing but a KPI that needs to be fulfilled by a philanthropic organisation.

This brings us back to the case which ST featured: Should we ‘blame’ volunteers or charity organisations for giving our poor, elderly canned food and unhealthy packets of instant noodles?

It is very easy to jump on accusing the volunteers of blindly donating for the sake of it, In all fairness, it is truly alarming for the case to have reached a point where hundreds of supplies have been stockpiled.

It is not just wasted effort, but wasted opportunities as there are many other families who could have benefitted from these supplies. At the very least, these supplies could have been easily shared with the food bank or with neighbours.

Nonetheless, the onus is on both parties—the volunteers and the recipient—for the lack of communication. Social workers or volunteers have to help educate and encourage beneficiaries, and likewise, beneficiaries need to help the organisations help them.

We have plenty of social welfare resources in place to help the poor, the elderly and the underprivileged. It isn’t perfect. It’s flawed, and the same goes for the people who make these social welfare efforts possible.

Behind all those efforts are volunteers and workers who are trying their best to make a difference. And if we ever stop to think about the magnitude of work that they do, and the emotional stresses they face in having to be on the ground, dealing with all the financially poor individuals, while also working with limitations, we would understand better than to shit on them for giving our seniors canned food and instant noodles.

Doing Away With Exams Sounds Great In Theory, But How Do We Evaluate Students Then?
I Almost Ended My Life 2 Years Ago
To Top