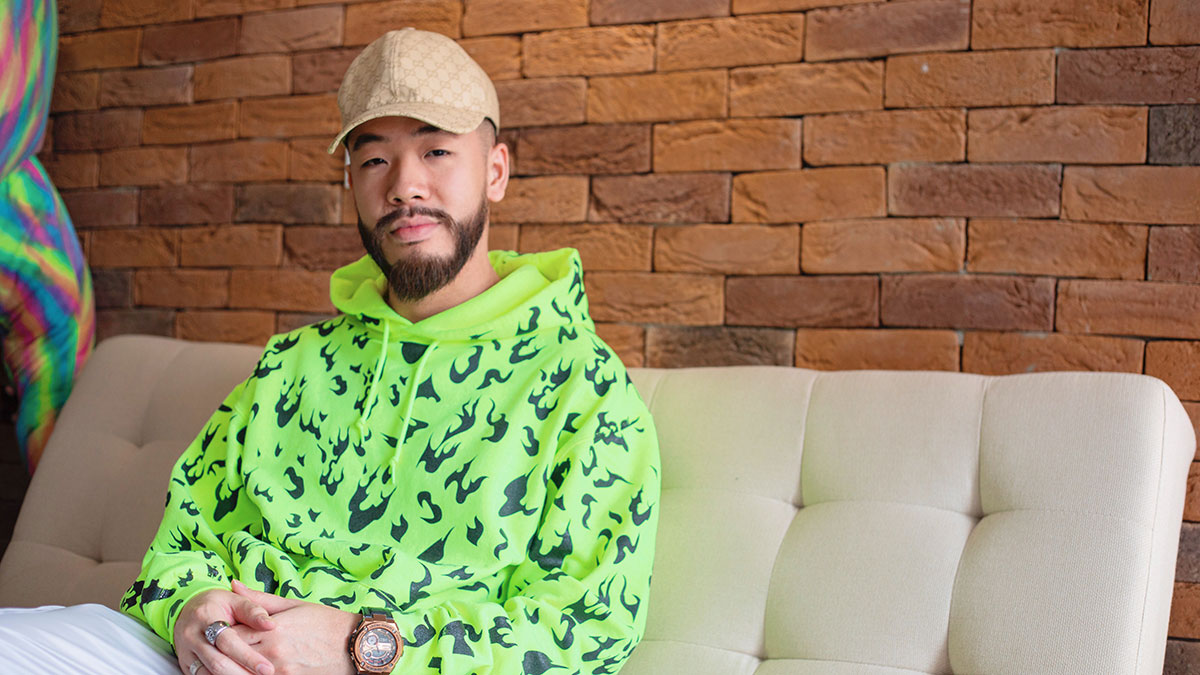 For a Singaporean Chinese guy with a long boxed beard and striking green hair tied up into a ponytail, that image alone would warrant antagonistic comments from conservative locals.

What’s more, for a Singaporean guy who raps for a living. That’s like a double whammy, in the sense where that would be everything everything our (traditional) parents would have discouraged us against.

In the 90s where most of us grew up in, one would have been an ah beng to sport such a bold look, and crazy to pursue music as a career—as stereotypical as it sounds.

But for 27-year-old Pek Jin Shen, otherwise known as ShiGGa Shay, these are all merely forms of expression.

Before I met ShiGGa, I was like most Singaporeans: I wasn’t particularly a fan of rap music or of him as an artiste. I didn’t dislike him either. But there’s just this impression of him as someone unfriendly, despite having never met him before. His physical appearance and his form of expression as a rapper probably contributed to that air of arrogance he seemed to give off. Though on the other hand, it’s strange if rap and hip hop is cheerful and merry.

This impression is something that ShiGGa has long come to accept, as it isn’t something within his control. Everybody’s got their right to judge, but at least for ShiGGa, he’d rather people have a chat with him before passing him off as arrogant.

“I don’t think I’m better than anyone else, I’m just a human being.”

And to be fair, he was actually pretty chill. It could be that I was an outsider, and a journalist in his eyes, but he was nothing like what I’d perceived him to be when I joined him at Zendyll Productions studios one afternoon, a usual spot where he would work on his music besides his home studio.

In fact, it felt more like a casual gathering of friends coming together to chill (and make music).

I was also treated to a couple of his unreleased works, which includes a collaboration with Korean artiste, Jay Park—set to release later this year.

ShiGGa Shay is also a man of humour. When I asked about his Moniker, he explained that it was an onomatopoeic play on the Chinese words, “是个谁” from “你是个谁,” which translates to mean “who are you”. This came at a time where it was unusual for a Singaporean to do rap.

Being A Lion City Kia

After a 3-year hiatus, ShiGGa recently released his comeback single, Paiseh, in April.

Just like a lot of his other tracks, it is, for lack of a better description, very Singaporean. And it is what got ShiGGa interested in writing rap in the first place. It is a way for him to express the many thoughts he has about Singaporean life.

“Growing up in Singapore, I was just like anyone else. I lived in a HDB and in that environment, I just had a lot I wanted to say but there wasn’t an outlet for me to say what I wanted to say. So I’d just write raps, and rap to kind of express myself.”

Contrarily, he was the only one in his family that’s musically-inclined and used to play the dizi and the trombone in school. Rap and hip hop came about after he heard an Eminem song on the radio. His fascination with the sound of rap songs grew when he dived into the world of Snoop Dogg, Tupac Shakur, and other hip hop artistes of the 90s era.

He was only 9 when he started writing rap. At 14, he performed at his dad’s 55 birthday party, to which he bashfully brushed away when I asked what he rapped about at such a young age.

“I don’t really remember but it’s something… kind of lame,” he laughed.

Mum And Dad Are The Main Motivations For Making Music

In 2009, his dad passed away. It was a pivotal period for ShiGGa as the sadness and trauma from losing his dad could have led him down an entirely different, darker path. However, it became the driving factor that contributed to his career today.

He had always been writing rap, but this time round, music became an avenue for him to express all the negativity he was feeling. More than just as a way for him to cope with the pain of loss, he also wanted to channel all his energy into putting something out there.

Music helped him get through his darkest time, and it was also his wish for his music to be a source of comfort for others going through what he had.

This became a goal that he consistently works towards when he makes his music.

As one of the first few musicians of our generation to have made a name for himself, and possibly the first Singaporean who have made it this far in rap, the challenges he faced are undoubtedly aplenty. There’s also the pressure of living up to expectations as a front runner for rap music in Singapore but for ShiGGa, it’s all a matter of staying true to what he had set out to do.

“Being recognised or known is not really why I did it in the first place. I really did it and am still doing it for the passion of music. And for the fact that I really want to share what I have with the world.”

A true Lion City Kia, many of ShiGGa’s song talks about Singaporean life. Hip hop is a reflection of the current state of society after all, and for ShiGGa, it is both his goal to make locals’ lives a little bit better through his music, and to put the Singapore sound on the world map.

He’s accomplished a lot for a Singaporean self-funded rap artiste, but nothing beats recognition from his mother.

His drive to be successful also comes from the need to take care of his mother. As an only child, ShiGGa has taken it upon himself to provide for her ever since his dad’s passing. His mum has also been his strongest pillar of support in his toughest times.

“I’m very close to my mum. She’s my emotional support, my rock. Everything I do, I do with her in mind.”

Since 2011, he has released several singles and albums, collaborated with many different artistes, and represented Singapore on local and international stages. He even dabbled in acting.

These are all laudable accomplishments but for ShiGGa, nothing beats being a filial son to his mother.

“Accomplishments and all that are external. It’s great being able to represent Singapore at the White House. It’s great performing for NDP. But hearing my mum say she’s proud of me is like the most important thing to me.”

Also read: “You Learn To Roll With The Punches” – A S’porean Millennial On Growing Up With 2 Sisters With Special Needs.

We Know Him As The ‘Hunky Hawker’, But Walter Tay Shares A Past He’s Not Proud Of
The ‘Brownface’ Ad Was Offensive, So Was Preetipls’ Video – Then What?
To Top