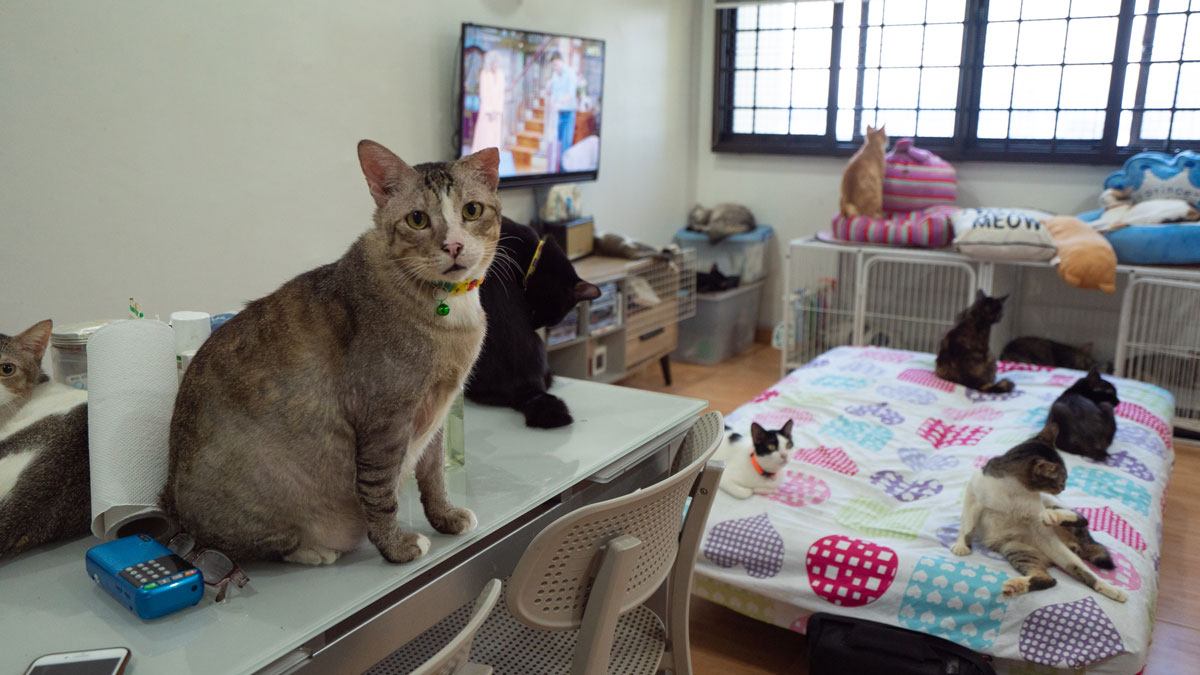 Even when you walk up to her humble 4-room flat, you can already tell from the packs of cat litter and assortment of pet accessories lining the corridor that this person keeps cats. A lot of cats.

38, to be precise, of which only 10 are her pets. The rest are strays that she has rescued to treat and rehabilitate. Even the 10 are rescues that she didn’t have the heart to release back to the streets due to their conditions.

When I visited Tiff* last Saturday, it quickly became apparent that this is a real-life Singaporean crazy cat lady—an identity that Tiff has come to embrace.

Her home puts any cat cafes in Singapore to shame. There were literally cats everywhere, and these are cats that clamour for your attention: running up to you, rubbing against your legs, and following you wherever you walk (even without the lure of food). But even for a long-time cat lover, I was a little overwhelmed by how manja the cats were when I first stepped into her flat that afternoon.

I first got to know of Tiff’s rescue efforts through a Facebook page she runs, Purrs & Meows.

Contrarily, she used to see herself as a dog person, that was until she started looking out for a cute ginger cat around her neighbourhood. What started off as casual cat feeding sessions became a desire to do something to help cats that are in need of medical attention.

“I didn’t know about sterilising back then and started reading up a lot on it. I read this article that explained the benefits of sterilising, so I decided to bring [the ginger cat] to get sterilised.”

It was then that she started to get increasingly involved in the welfare of stray cats she encounters. That was 10 years ago. The simple sterilisation efforts has since evolved into a noble cause of saving abused cats or those suffering from complicated medical conditions.

A Crazy Schedule For Any Normal Person

A ‘new’ 4-room HDB flat isn’t very spacious and with 38 cats living under one roof, I would imagine it to be a hell of a job to keep the place in order. And it is—a big part of Tiff’s daily routine is spent on cleaning. One full cleaning session alone would take her three hours to complete, which is only possible on weekends. And showering the cats is something that can only be done across a few weeks.

However, her daily routine do include regular cleanings. It is the first thing she does when she wakes up at around 6.30am daily. She cleans again after feeding the cats, and then showers before heading for work from 10am to 7pm.

When she returns home after work, she repeats the same cycle of cleaning-feeding-cleaning again.

“I [also] clean the litter box quite often. I’m a bit OCD because I don’t want the smell to escape [to the corridor].”

And indeed, when I stood at her doorstep before entering, I didn’t pick up any trace of odour at all. Although, there was a faint scent that’s reminiscent of a typical pet shop with dogs or cats, and the floor did feel a little clammy when I walked around.

After her night routine at home, she would head out to feed the strays at three locations: Northlink Industrial Park, the area around Sembawang Shopping Centre, and Woodlands industrial area. It is also the time where she goes on the occasional cat rescue missions, depending on whether she spots any cats in-need, or from any public tip-offs.

By the time she cabs back to her home, it would have been 2.00am to 2.30am. She would clean again if required, and unwind a little by catching up on Netflix shows. Every weekday night, she gets an average of three hours of sleep before the whole cycle of caring for cats-work-and caring for cats repeats.

Even thinking about such a lifestyle made me feel stressed out.

Dedicating Her Life To Cats

A single woman, Tiff runs her cause independently. Although she does get the occasional help from friends who also do cat rescues, most of her rescue and rehabilitation efforts are handled by her alone. This includes the funds that are pumped into it.

Over the years, almost all of those efforts are self-funded. The money goes into everything from essentials like cat food and litter, to hefty vet fees to treat the cats. Sometimes, she gets donations from kind souls who supplement her with assorted items that help with daily maintenance.

She appeals for financial help for cats that require expensive surgeries or treatments and occasionally, she does get monetary support in offsetting the expensive medical bills. These bills can range in the thousands, and it is not unusual for her to be forking out $4000 just to treat one stray cat for one issue—which is what she had recently done for two cats, one with Parvovirus and the other fighting an autoimmune disease.

When I asked her how much she has spent on Purrs & Meows over the years, she trailed off after a “wah…”, pondered over the question for awhile, and explained that she has lost track. But she estimates the figure to be over a hundred thousand.

“I hardly have any savings,” she tells me, “but I do have a savings plan for myself.”

She went on to tell me about how she has cut down on a lot of things, and only sets aside money for transport, as it is one aspect that she needs in order to continue her cat feeding and rescue efforts. Unlike ten years ago, food, leisure, and material goods for herself are hardly a priority now.

Being a full-time ‘cat guardian’ has also drastically changed her social life. “I don’t have any friends,” she answered me flatly when I asked about it.

In a way, it made sense considering the amount of time she spends on her cats, whom she sees as her babies. But even as a cat lover myself, I can only imagine the kind of deep love she has for the cats in order to give up almost everything that makes up an average person’s life, and devote in to improving the lives of these strays.

Tiff’s extreme devotion has also been a cause of many squabbles between her mother and her. Although, things have improved and her mother, who lives with her, do help her with the daily feeding and cleaning.

I asked Tiff if she had ever wanted to give up, to which she instinctively answered: “Everyday.”

For Tiff, this is something that she has invested way too much into to have second thoughts. What more, when she wakes up everyday to more than 30 cats meowing for her care and concern, it is impossible for her to just stop doing what she has been doing. She just cannot bear to.

Although she had never started Purrs & Meows with the intention of being a crazy cat lady or an avid rescuer, it has, over the years, morphed into that today.

“My aim is to rehabilitate the injured cats, get them well and get them adopted. For those who are terminal, I just want to treat them well and give them a comfortable home before they pass on. If I turn a blind eye to these cats, they will probably just die and they will probably die sooner. If they die just like that, nobody will know, and I think it’s just really very sad.”

*The name has been changed to protect the identity of the person.

Also read: “I See Myself In Them”: This Once “Wannabe Beng” Now Helps S’pore Youths Live Limitless.

Look At My Ability, Not Disability: This S’porean Plays Tennis Despite Being Blind
Discussing Death – If Life Is A Journey, Why Are We Scared To Talk About The Destination?
To Top