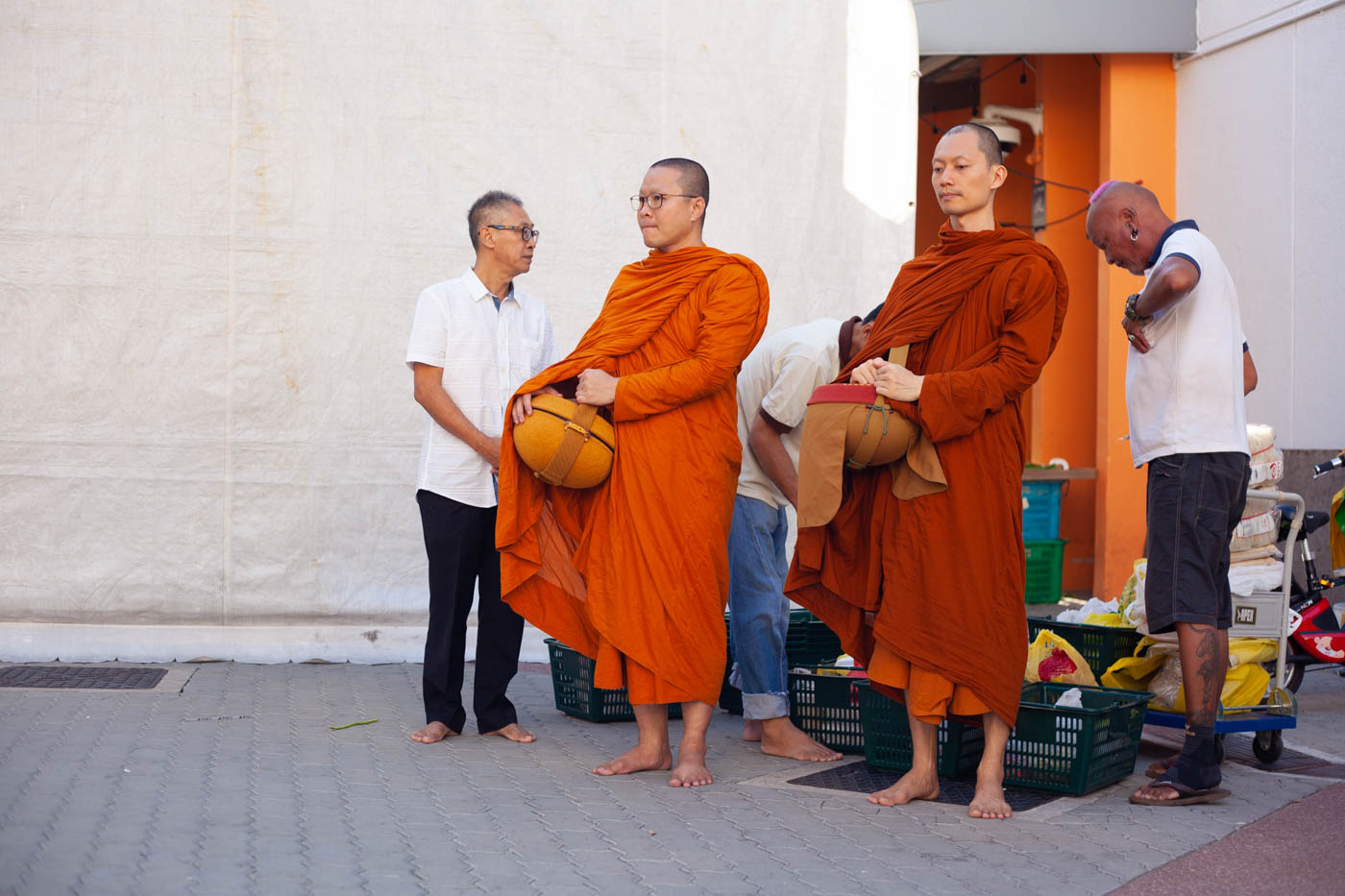 At 5am where most of us would have still been deep in slumber, Phra CK gets out of bed. Like the other monks who are residing at Palelai Buddhist Temple at Bedok, waking up at the crack of dawn is nothing out of the ordinary.

It’s an impossible feat for most of us, but for Phra CK and the other monks we saw when we visited the temple two weeks ago, this is a lifestyle that they have long accustomed to.

Back when Phra CK was training in monastics in Johor, meditation sessions start as early as 4am every day. Over at Palelai Temple, the first agenda starts at 6am daily—the morning chant.

So there I was, at the start of my day where I will tail Phra CK to find out what a monk’s life is like in Singapore. 34 this year, Goh Chun Kiang is a monk by choice and was one of the youngest in Singapore to be ordained at 23 years old.

In a video interview with us later on, Phra CK shared how he wanted to be a monk ever since he was a primary school kid. Seeing the conflicts between his mum and dad back then made him think about the meaning of true happiness. Then, the shows he watched and books he read further influenced his perspective of wanting to be a monk.

Now a ‘full-time monk’, he resides in Palelai Temple and lives according to the daily agenda set out by the temple.

Together with the Millennials of Singapore team, we sat in silence at the back of the main shrine as we waited for the morning chant to start. The only sounds were the occasional creaks from when the wall fans oscillated. The monks entered singly, each of them finding their own spot in front of the Luong Pho Phra Buddha Jinaraj. And as everyone waited in silence, I actually felt like I would on a very relaxing holiday—calm and with a clear mind.

The temple is open to the public and while we were there, a few people came by for a short prayer and offer incense. A handful joined the morning chant, although, Phra CK shared that the evening chants usually see more crowd.

There is a rack at the back of the hall with chanting books as well, so members of the public can refer to the book and chant along if they wish to.

Midway through the session, I took a copy to attempt to follow the monks in chanting. After flipping through the pages, I gave up, for I had no idea where they were already at. And it was in Pali language.

When I caught up with Phra CK later, I asked how he even managed to memorise approximately 30 minute worth of chants and what more, in a language that doesn’t come naturally to us.

“If you’re talking about intensive memorisation, it took me a month to remember.”

These daily chants covers several aspects of Buddhism, of repentance, of dedication of merits, and of various teachings in Buddhism among others. For Phra CK, the daily chants is also a sort of recollection of the fundamentals in Buddhism and monastics. The chants help him stay mindful.

Mindfulness is one of the key principles they practice in their life as a monk. Such that even during meal times, the monks have their food in silence even as they sat together at a round table.

The whole idea of mindfulness, Phra CK explained, is also to overcome desires.

The exception is if they have urgent matters that require them to talk over their meal. I guess that explains why their meal times are only 30 minutes.

We followed Phra CK to their meal area and watched from afar, for privacy reasons during their meal times.

One of the temple volunteers later invited us to join the other volunteers for breakfast at the kitchen, when the monks were done with their meal—the dishes that are served to the monks are collected back to the kitchen area for volunteers’ consumption after.

When I saw the dishes, I was struck by the quantity and variety of dishes there were there—more than 10 plates of food. The dishes reminded of homecooked meals at my granny’s place: stir-fried vegetables, prawn with leek, carrot cake, and bread, among others. There were also about five plates of fruits like bananas, jackfruits, lychees, and apples.

Unlike some sects of Buddhism that require one to be vegetarian, Phra CK and the other monks at Palelai Temple consider food a blessing from lay people, and they consume whatever is given to them, including meat.

Part of their daily morning routine includes an area cleaning right after breakfast. The scope of cleaning depends on the number of monks staying there and what there is to do on that day.

On that day, Phra CK was mopping the main shrine. On other days, he could be clearing rubbish or sweeping the floor.

At around 8.20am, we headed out to a neighbourhood market area at Tampines, together with another monk and five temple volunteers, who drove us there.

Because being a monk means renouncing material wealth, they have to depend on lay devotees for their food. This is one of the reason they go out on their alms round daily, a traditional practice where they collect food from devotees.

Before this, I had, with my very limited knowledge and my misguided impression of monks, envisaged the alms round to be where they go around coffee shops or markets asking for food.

Instead, a crowd of devotees came up the moment the two monks took their spot at a central location in the middle of two coffee shops and the side of a supermarket. If you didn’t pay attention, you would have thought that people were rushing up to get freebies. The baskets and trolley the volunteers prepared were filled up within the first five minutes, and were wheeled away to be loaded up to the car by some of them.

A short 15 minutes later, we were back on the car headed back for the temple.

I asked Phra CK if the alms round is usually this short (and easy). He explained that at the beginning, it was more challenging as people didn’t understand what they were doing. There were even times where the Police has come up to check on them.

However, as the monks at Palelai Temple have already been following the same Alms Round schedule for more than 10 years, residents and devotees around are already familiar with this. The regular devotees will also have stand-by for the alms round when the time comes.

“Volunteers recognise the devotees, so once they see that they have more of less come already, then can go already.”

Although, this isn’t something that is practiced by every practicing monk. In certain countries, alms round is highly-frowned upon as natives see it as a shameful act of begging.

“This is why during the alms round, we have to look down and stay silent. We are not supposed to solicit donations. We cannot ask for anything, because that becomes begging, and we cannot speak or give any advice in return because this exchange becomes a form of trading.”

This is one of the ways you can tell bogus monks apart from the real ones.

Upholding A Strict Code Of Conduct

For those who have ordained and devoted their life to monastics, these are also just a few of the 227 rules that they have to abide by.

Some of the rules include basic ones like not lying and not killing, and those that lay people would find hard to live with: Not being able to accept or use money, not being able to laugh loudly, and even extremely specific rules like “not to use mattresses, cushions or cloths filled with cotton or kapok.”

Even meal times are ‘regulated’, as monks are not allowed to eat after noon. Thus, their second and only other meal for the day happens after the alms round at either 9.30am or 11.30am. I cannot fathom how I were to survive with not eating after 12pm, but for Phra CK, these things aren’t a big deal. It is all a matter of conditioning.

“Before I ordained, I went to study up on the rules. When I first read all of them, it was a bit ‘wow’. Initially, it looks impossible when you just read it, but when you apply it to daily life, you just get into it.”

In the end, these drastic lifestyle changes are possible because they have been trained. Nonetheless, there were many things that he admitted having to give up.

“A lot of things. Personal favourites like gaming. I used to love gaming. Music as well. But all of that were just temporary and we are trained to overcome such desires at the conditional retreat, before getting ordained. At the beginning, there was something like Cold Turkey. But over time, I just get used to it.”

As a monk, he dedicates the rest of his day (free time) to meditations, memorising chants for different rituals, and on his own assignments. He is also currently an advisor to a Buddhist youth network, and helps with leadership training, and interfaith training.

Now that Phra CK has pledged to an ascetic lifestyle, I learn that the only thing he is able to watch (by choice) are news and documentary films.

With no worldly pleasures to look forward to unlike possibly all of us, and no material wealth to strive towards, I wondered what, then, motivates Phra CK every day. Are monks really, like those corny Journey to the West kind of movies, just in search of achieving Nirvana?

The ultimate goal as a monk is to be fully dedicated to overcome desires, and attain peace and happiness. However, it is contradictory to say that that is an end goal either, as it signifies desire.

“Monkhood for me is a full-time volunteer job, or a lifetime volunteerism. It’s a very personal spiritual cultivation.”

Most of us will never fully comprehend the life of monks and nuns in our lifetime. From our perspective, it is a big sacrifice on things that make up our life today, all to pursue a life that surrounds religious teachings. Furthermore, it is a devotion of one’s life in something so intangible.

After spending half a day with this 34-year-old Singaporean millennial however, I am reminded of how life is really that simple if you mean it to be. We just live in an entirely different world, with completely different perspectives of the world and of our existence. While we are caught up with trying to live a hedonistic lifestyle, being a monk for Phra CK is being free. Free from the need to seek fame, fortune, love, or any sort of material pleasure to live happily. Because at the end of the day, a fundamental tenet of monasticism is impermanence.

Why fret over all those things when we will all go one day?