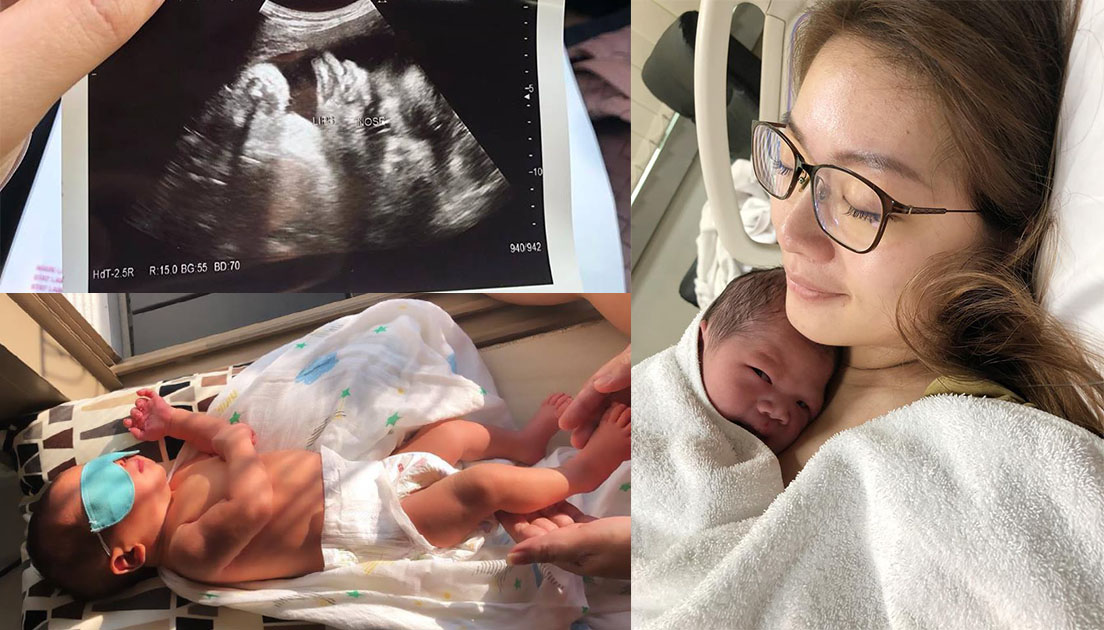 The first wave of ‘fake’ contractions kicked in at irregular intervals of 8 mins, 10 mins, 4 mins, and 6 mins. I recorded the duration and intervals of each wave on the contraction tracker app.

The day went on as per normal. My mother-in-law even packed chicken rice for Fong (my husband) and I and we had dinner at home.

I had a bloody show but the contractions slowly went away.

The contractions came again. This time, the contractions were starting to come on an average of 6 to 7 mins and the intensity of the pain was getting stronger. I tried lying down but it made me feel even worse. I couldn’t sleep.

I wondered: Is it another round of ‘fake’ contractions again? I wouldn’t want to make a wasted trip to the hospital. But if it were real, I would want to wait until it has passed midnight before we check in so that we wouldn’t be charged an additional night. So, the waiting game began.

I continued monitoring the contractions. The waves started to come in stronger and at shorter intervals. Fong had gone to bed and I started pacing around our bedroom.

I tried to find an optimal position that can help relieve the pain. I moved from sitting in the armchair to a standing position, to sitting down on the floor against the wardrobe, to sitting up on my bed, to lying down on my bed. I tried the deep breathing technique, hoping it will help. But nothing worked. I wondered if I should wake Fong up, but I wasn’t sure if this was the real deal, so I continued to time the contractions and endure the pain.

Fong was shifting around in his sleep when he accidentally kicked me. He woke up and found me sitting at the edge of the bed. I told him I was in pain and my contractions had been coming in fairly regular intervals. He suggested that we make our way to the hospital slowly, given that I already had a bloody show this afternoon.

He remained calm and collected as he started to do some last minute packing. I went to take a long shower, pausing to grab hold of the shower head pole whenever the contractions kicked in. Then, it finally dawned on me that buibui (my baby) is indeed coming. We made our way to Mount Elizabeth Novena Hospital once I was done.

We checked in to the delivery suite. I was given enema to clear the bowels first before the nurses put me on IV drip to ensure I was hydrated throughout. The urine catheter was also put in place. The nurse then placed two sensors across my tummy using elastic straps, one to monitor the contractions, one to monitor buibui’s heartbeat. It was then she checked that I was already 4cm dilated.

The anesthetist came and gave me the epidural. I was asked to arch my back as much as I could. She had to poke me twice or thrice because I moved.

Soon after, I could feel a cooling sensation down my back. The effects of the epidural kicked in around 15mins later when I felt both my legs go numb. I was also given oxytocin via drip in order to help labour progress. Once in a while, the nurse would come in and adjust the dosage of the epidural. This was to ensure that I could still feel some contractions so that I could push better later on.

I felt tight contractions on my lower pelvis. The nurse checked and noticed that my water bag has burst and I was 8cm dilated. Buibui’s head was gradually moving down. I could start to feel the painful contractions again although I was on epidural.

This was the part where buibui’s heartbeat started to drop. The nurse quickly gave me the oxygen mask and started shaking my tummy as she tried to locate buibui’s heartbeat again. She shook my tummy multiple times and asked me to breathe in deeply. I could hear the monitor projecting a heartbeat that was slowing down.

After a few minutes, we finally managed to stabilise buibui’s heartbeat. You can only imagine how worried I was. The nurse explained the series of events to me and shut off the oxytocin drip. I didn’t dare to move an inch anymore.

Stronger and stronger waves of contractions kicked in. It felt as if I didn’t have any epidural at all. The nurse increase the dosage from 12ml to 15ml. I asked her if the drugs will affect buibui’s heartbeat again.

If it will, then I would rather bear with the pain than allow it to affect my baby.

The nurse went out to call the anesthetist. When it was just Fong and I left in the room, I started crying uncontrollably. I was in so much pain and I was worried about buibui at the same time. I continued to ride through the unbearable contractions, telling myself that:

“Pain is temporary. Buibui is forever.”

But the pain overpowered my mind and body, so much that I told Fong that I wanted to just do C-section now. Fong tried to console and encourage me. I was pretty sure he felt so helpless watching me cry. The nurse came in and started consoling and encouraging me too. She gave me laughing gas and told me that the anesthetist approved another stronger drug for the pain. But it will, again, take 15mins for the drug to take effect. I continued my mantra.

I was fully dilated and the nurse practised pushing with me. The lower end of the bed was removed and two leg rests propped up at the sides. As the contractions came in, the nurse guided my breathing and pushing. She was so encouraging, telling me that she could see the baby’s head and that he has a lot of hair. This motivated me as well. Another nurse placed a mirror at the end of the bed so that I could see buibui’s head as I pushed.

My gynae reached and with three pushes, Baby Eyden was born.

Both Fong and I teared together. It was such an amazing moment and I kept reliving it over and over again in my head.

We requested for delayed cord clamping, and Fong cut the umbilical cord. They put Eyden on my chest and I marvelled at how handsome he is.

The gynae continued to stitch me up as the nurses proceed to weigh and check on Eyden. He was born 3.4kg, 52cm long, and 35.5cm head circumference. The nurse complimented on my wonderful performance again, birthing this big-size baby with my petite body.

After a while, we tried direct latching Eyden onto me. But I was shivering so badly from the side effects of the epidural, so we passed Eyden to Fong for skin to skin contact instead. At that moment, I felt so thankful to have Fong and the nurses by my side throughout.

Now I understand. This, is why mothers always say: “Everything is worth it.”

This post was originally written by Serene Heng. We have reproduced this with her permission.

Also read: I Became A Dad At 22 – Our Parents Opposed But We Kept The Baby.

(All images used in header image taken from Serene Heng)

We Talk About Dream Weddings, But How Would You Picture Your ‘Dream Funeral’?
Battling Postnatal Depression As A First-Time Mum: “I Felt So Lost And Lonely”
To Top