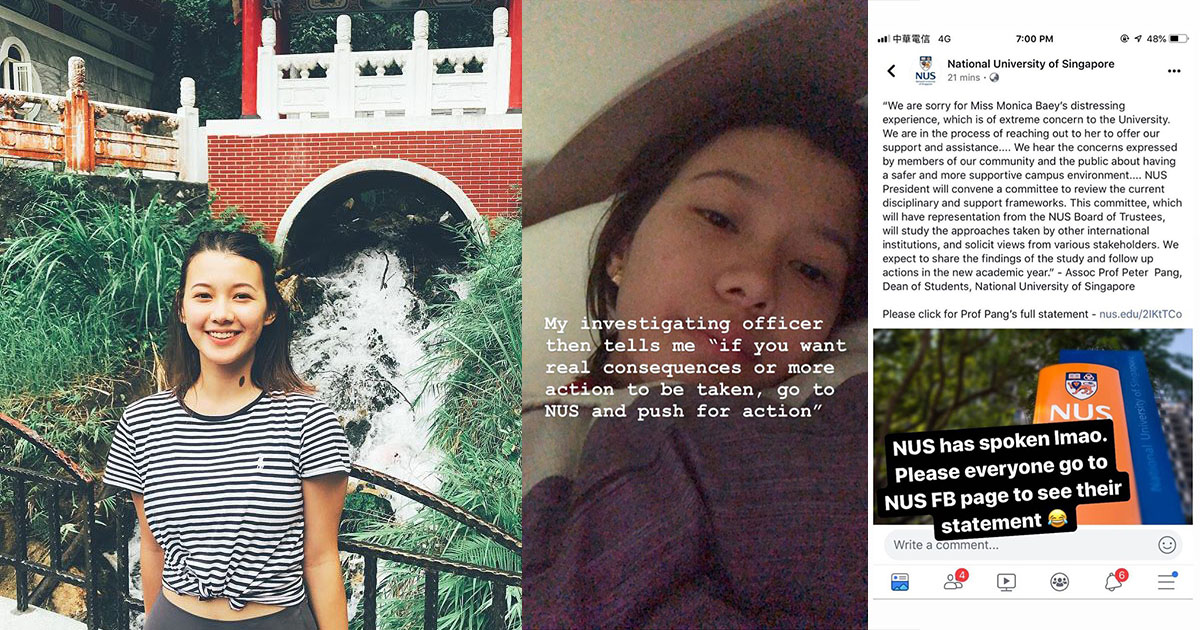 Last Friday, an NUS student, Monica Baey took to Instagram (IG) to seek justice for her case: she was inappropriately filmed by a fellow student while showering in the school hall last November.

Her string of IG Stories has since gone viral, picking up attention from several media outlets.

There has also been some progress in Monica’s case. However, having followed her story and seen the way the events have unfolded have raised some very uncomfortable truths about the kind of society we live in today.

You can find the full story from Monica’s IG profile highlights here.

From the way the police told her to “just accept the outcome,” and, “if you want real consequences or more action to be taken, go to NUS and push for action,” to the correspondence between Monica and NUS, the way the relevant parties handled this seemed apathetic at best.

And this is a sad reflection of the society we live in today. A society that only gives attention to an issue when it is blown up enough.

Had Monica accepted the results and quietly made peace with just being that unlucky one who had to experience such an incident, this case will easily and quickly be swept under the rug and forgotten. Just like the many other peeping tom incidents that have happened.

Just last year, a 26-year-old male student was given the same 12 months conditional warning when he was caught committing the identical act that the perpetrator in Monica’s case committed. This student was later sentenced to nine months’ jail and three strokes of the cane for molest and outrage of modesty, which he committed during the conditional warning.

Another man was jailed in 2017 after he committed sexual misconduct-related crimes while “under a conditional 12-month stern warning for attempting to take an upskirt video on a woman”.

Yet, NUS has, within two days of Monica’s story going viral on social and mainstream media, announced its intention to convene a committee “to review its current disciplinary and support framework”, making it a prime example of why people rely so heavily on social media to incite for real impact.

It is also very sad that we have come down to this. Why do we need the court of public opinion to know what should inherently be right or wrong in our morals?

Our nonchalance towards cases of sexual misconduct

We like to think of ourselves and our society as encompassing all the morally right values: fair, righteous, honourable, and et cetera.

While there were results that came out of the case, it did nothing good for society. I agree with second chances, but the conditional warning is but a joke if one were to consider the fact that the perpetrator had previously snuck into another toilet. Furthermore, there have already been convicted cases of sexual misconduct as shared above, similar to Monica’s.

If it is also true that many students have been a victim of such predatory behaviour in the campus residences before, I question the good in settling such cases with restrained or even hush-hush procedures.

We’re talking about second chances for someone who has committed an inappropriate act with the intent of doing so, albeit under alcohol influence—this cannot be an excuse.

Regardless of gender or location, there is no excuse for entering a shower facility with the intention to film someone else.

We’re talking about the questionable lack of a zero-tolerance policy against sexual misconduct and predatory behaviour.

For NUS particularly, sending an apology letter that Nicholas was obligated to write under the school’s direction to Monica is nothing but patronising. Anyone who read it could tell the lack of sincerity in the words, and a standard PR template-like apology does nothing to assure a victim.

The one-semester suspension and ban against entering campus residences do nothing for long-term deterrence and assurance if NUS does not display any empathy and concern for the case beyond closing it.

Monica has also shared in a Ricemedia article that NUS had told her that “she’d sent them her statement ‘a bit late’, and that they’d already arrived at a punishment” when she went back to NUS to push for action. In the same article, Monica also shared that NUS had claimed to take her statement into account, but said the outcome “would have been the same”.

This, to me, is a clear indication of the school’s consideration of her case, or rather, the lack thereof. While the victim was crying out for help from the people whom she believed would serve the justice she deserves, the people whom we trust to keep us protected only reacted with the minimal concern—your statement will be taken into consideration, that’s all.

But this should not be about closing the case and moving on. This should be about our tolerance for sexual misconduct across the board.

Closing this case as it is will only allow for such inappropriate misconduct to continue on, as it signifies to the community that such behaviours aren’t that severe (as it should be). In time, this will only lead to other victims having to go through exactly what Monica has had to.

If Monica’s and all those previous, similar cases are not enough, how many cases must it take for us to make substantial change?

Why Do We Need To Wait For Storms To Blow Up?

It’s heartening to know that social justice is at least a lot more prevalent in Singapore compared to other places—a 19-year-old girl in Bangladesh was burnt to death after she spoke out against sexual assault, and women in India struggle with extreme cases of sexual harassment and assault on a daily basis.

However, we have our own problems.

Not only does our society seem to be nonchalant about issues until it starts getting viral, Monica’s case also reminded me of how desensitised we have become to such issues.

Perhaps it is our progessively liberal mindsets, or just the increase in the number of sexual assault-related stories that we have been exposed to, perpetuated by the #metoo movement. This has inadvertently created a victim-blaming culture among us. At the very least, because of the way we’ve seen Singaporeans react to such stories with scepticism and judgment, most victims would rather stay mum, forget the incident, and move on.

But I wonder if we are fighting the wrong wars here.

Should we not be looking into ways to empower victims in speaking up, and in protection and recovery efforts instead?

In a statement issued to NUS by almost 500 students following Monica’s case, four sets of recommendations were proposed. The recommendations included an “Office of Sexual Harassment Prevention, Reporting, and Response with a 24/7 emergency hotline service for survivors,” and also campaigns to raise awareness on sexual harassment in the university.

These are great examples of initiatives that would allow students to have a greater understanding of what constitutes sexual misconduct.

More importantly, we should consider how important it is for all of us to adopt a zero-tolerance mentality towards any kind of sexual misconduct, especially in a society that prides itself for safety and equality for all genders. It is about cultivating a community that can accept and openly discuss matters so sensitive (sexual assault and harassment), and it is only possible with time and dedication from every part of the institution.

I trust that NUS and the police both have a fair amount of challenges and stakeholders to be accountable to.

However, they need to understand that this is beyond being an impartial third party. They need to know people’s trust in them to serve and protect us in ways we cannot do so without their support.

It is not about enabling women to seek attention or affirmation through social media. Neither is it about clamping down on such behaviours with the harshest punishments.

It is about their apparent lack of empathy, compassion, and concern over what is clearly immoral, predatory behaviour that causes trauma victims.

Living With Social Anxiety: “I Couldn’t Even Order Food From McDonald’s”
Are Nursing Homes Only For The Dying And Abandoned?
To Top