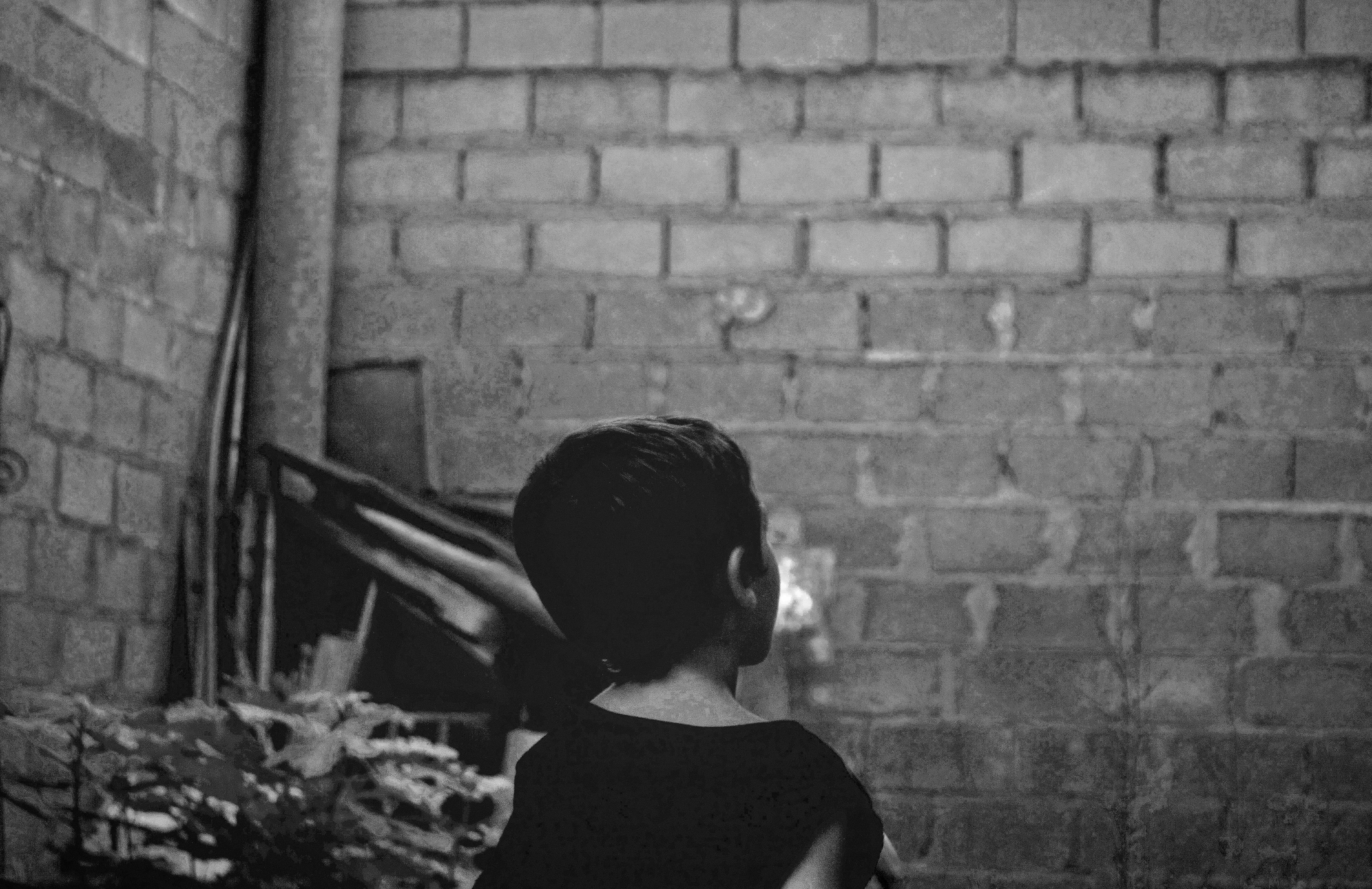 I will never forget my sister’s arms covering mine like a seatbelt as we watched Mom chase Dad out of the house. I didn’t understand what was going on back then and was way too young to grasp the concept of cheating. It just seemed like Mom and Dad had a fight about something.

Inevitably, that led to a divide in the family, and we pretty much lived without my dad for a few years.

Dad came home when I was about 10 to 12. Although, his presence was always fleeting. I’d see him around at home on some days and then for long periods after, he would go missing again.

It didn’t feel right, but nobody said anything. Nothing about the affair (which I came to understand much later on), nothing about this unusual arrangement, or what was happening between Mom and Dad. There was no “our Dad is an idiot” uttered among my siblings, no “your Mom and Dad are separating” from the elders, nothing.

As much as I thought things were odd, I learnt not to question anything and to just accept the way things were. Over time, what is supposedly a broken family developed into a norm for me.

However, I also believe that a bad husband doesn’t necessarily make for a bad father.

Every Parent Loves Their Kid

In fact, he played a crucial role in my childhood and through all the times I’ve spent with him, he had ingrained in me many inherent attributes, albeit a mixture of good and bad ones.

Ever since I could walk, my dad was training me to kick a ball, and kick a ball I sure did. Like his father, he was a semi-pro footballer in the past, and I am very grateful that he had put me into an academy school for football at a very young age, for football has become a huge part of my life, even after 20 years on.

On the days where nobody was sporting enough to bring me out, Dad would whisk me off for some entertainment, taking me out for meals and spoiling me at arcades.

On other days, however, he would bring me out bar-hopping. Not the hipster bars that our millennial friends would chill and have deep conversations at either, but the shady ones with the flirty bargirls, heavy cigarette smoke, and sometimes god-awful karaoke.

Looking back, these bars were extremely inappropriate places for a father to bring his twelve-year-old son. But this was (in his own words) his way of ‘opening my eyes’ and ‘broadening my horizons’.

I was just twelve when I saw the world of bar girls taking orders from men who would eye them up. And when my dad flirting with different women became normalised behaviour, masked under the guise of ’friendly conversations’. Conversations that my dad would say, “talking cock” and “all in good fun.”

As a quiet kid by nature, I mostly observed those chummy interactions and minded my own business.

My dad introduced me to pool, and I’d always look forward to being back at the pool table—that became part of the only reason why I looked forward to going out with him later on.

Over time, I started to notice that there was this one lady who would approach my father on many days. As a kid, I didn’t really think too much into what that meant, except that she was my father’s companion for the night.

Then one day, my father asked me to call this lady Mom.

I cannot even begin to explain the mix of confusion and perturbation that put me in.

I know my mom, and she’s the woman who has been taking care of me since young, and whom loves me with all that she has. This lady, on the other hand, was someone who gets chummy with Dad on certain nights at the bar. How am I to call her Mom?

At the same time, I had no idea what it meant for my dad to do that.

It messed my mind up about what love is, how relationships work and what is morally right. It messed me up knowing that I had been practically watching my dad spending time with his mistress(es) thinking that it was no big deal. And to realise this whole other world that my dad had been living while my mom was back at home, slogging to look after her three children by herself. Are relationships like that? I didn’t remember it being like that in shows or anywhere else.

Looking back, I definitely I would have stood up to him if only I knew.

If only I knew.

You Can’t Choose Your Family

Since young, the phrase “no matter what, he is still your father” has been reiterated to me by my aunts, my uncles, and even my mom. And for the entirety of my childhood, I truly believed that my father was my father no matter what.

Despite all the shady activities and mistresses, I still saw him as a father. I appreciated having him around and genuinely believe that in his mind, this (bringing me into his world of bars and girls) was his way of getting closer to me.

The fact that we share quite a few similarities and him having imparted various skills that turned into personal passions of mine helped maintain that somewhat positive image I had of him.

As the only person that he let in on a side of him that no one else knew, I also saw myself as the potential bridge to making my family whole again (once again, because family should stay together right?).

I had even rationalised that perhaps, all the time he had spent with me was a cry for help. As the only family member who was close to him, I felt like I was able to break him out of his unhealthy habits at some point.

Unfortunately, it was all wishful thinking because what was a father-son relationship to me was to my dad, something that he could exploit. At least, that was what it seems when I picked up a call in late 2016.

Children Are A Poor Man’s Riches

After the initial state of confusion, it hit me that my dad had given his son’s (my) personal details to a loan shark.

The most wrong I’ve done to him was probably stealing from his piggy bank (maybe it’s karma), but there I was as the guarantor for him to loan sharks. It was one of the worst feelings in the world, and I felt absolutely betrayed.

Besides the loan sharks, he had also sold my insurance for money, and used my name for a telco plan, which racked up a debt of $900. When my family confronted him about it, his response was, “let them sue, they wouldn’t dare.”

With the help of my relatives, my family eventually paid off all the debts in hopes of closing this chapter, as my dad promised to do. And for a moment, I really thought that that was it for drama.

Then, just last month, I received a series of messages looking for my father. Again. From loan sharks.

It was barely three years ago that we paid off all his debts, but my father had let us relive all of those feelings of confusion, fear, worry, and heartbreak all over again. All for money which we have no idea what he needed for.

“Blood Is Thicker Than Water”

I used to love my father for the moments that he had brought to my life. For the times that he taught me football (even though the methods aren’t the best), how he introduced me to playing pool, which I’m good at now, and for just being around in his own, unorthodox way.

These skills and moments, however, do not even come close to justifying what he has done to my mom, my family, and me.

Not only has he broken our heart so many times, he had, through exposing me to the world of bargirls and flirting in my formative years, given me a warped belief system. I’ve had to relearn what it is like to love and to learn how to differentiate the ‘rights’ and ‘wrongs’ in relationships—not just romantic ones. I’ve hurt many people because of that and I beat myself over it.

For a long time, I struggled with coming to terms with having him as my father, and I cannot deny the many times I blamed him and wondered what I did to deserve a father like him.

I believe there are many things that contributed to how he turned out. Maybe it was his upbringing, or something that messed him up when he was young, but something should have contributed to him being this way. But for the most part, this man did not treat me like his son and I cannot possibly blindly accept that blood is thicker than water like I have been brought up to believe.

Learning to accept that has given me peace that I did not have for a long time. Lacking a ‘proper’ fatherly figure definitely affected my life but I’m thankful to have moved on mentally.

The whole concept of a traditionally-complete family is lost to me, but I’m happy to say that my family is as complete as it needs to be now. I have my mom and my siblings who love every bit of me, and whom I love as dearly. That is all I need from a family.

The Inevitable End: What’s It Like To Grow Old In Singapore?
Dealing With Cancer By Running, And Being Called ‘Chao Keng’ For It
To Top