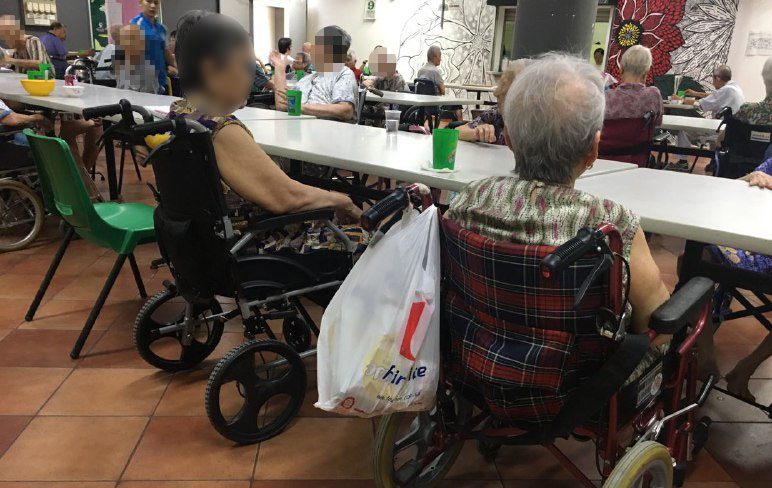 69-year-old Mr Zhen once attempted to take his own life. “Since there’s nothing [left] to do, I may as well die.”

In my attempt to learn about the lives of elderly in Singapore, I had spoken to five other seniors in their 60s to 80s. The one thing that struck me was how there is an unspoken, but very perceptible sense of aimlessness.

In an article by The Epoch Times last year, a 2008 research article was brought up, where all 19 interviewees “reported feeling lonely or depressed, and many said they live by the day and endeavour not to think of the future.”

Where one has pretty much fulfilled the most of our life goals, like getting a job, saving up, starting our own family, or seeing our grandchildren, it can be hard to fathom that there is nothing else to look forward to.

And Mr Zhen is just one elderly person who has struggled with his thoughts of mortality as he age. There has been studies on how there are more old people who struggle with loneliness and how socially isolated seniors have a higher risk of dying prematurely.

When I visited Moral Home for the Aged Sick last Saturday, I got to speak to 72-year-old Winnie Koh, who has been running the nursing home as Chief Executive Officer (CEO) for more than 15 years.

She shared that one of her residents has suicidal tendencies, and had once tied bedsheets and put it around his neck in a suicide attempt. Likewise, that resident did not see a point in living, “when [to him,] he’s already 90, nearing 100 years old, and does not have the ability to do many things himself.”

This resident has also went through certain rough patches as well, as a very close female friend of his had passed away.

“I can feel the loneliness in him. He doesn’t speak to [a lot of] people.”

After a short pause, Winnie explains that the elderly do not fear death per se. For the most, those who fear death fear going to hell.

However, Winnie acknowledged that there are those who struggle to let go, in the sense where they could have unresolved wishes: people they want to meet, messages they want to tell their loved ones, or something they want to complete.

32-year-old Alvin, added that having worked in the eldercare sector for about six years, he has often hear elderly regretting not treating their family members better or not better providing for them, “they definitely fear for the people and the relationships they are leaving behind.”

This is where, at a nursing home, they play up their role of caring for the residents. Winnie explains, “it’s the comfort [they need], to affirm them that they are ok, and that [whatever they want accomplished will be taken care of.] I will arrange for family members to visit. Usually they do go off peacefully after that.”

Along with the physical or cognitive impairments, the elderly face a whole set of very personal and emotional hurdles as well.

Before working in the eldercare sector, Alvin, like many of us, never understood the stubbornness and ego that many elderly have. But now that he has got a glimpse into the lives of different groups of elderly through his six years, he explains that most elderly fear losing their independence, and when an elderly go from “a provider, a giver, a successful person on their own rights losing the respect, mobility and cognitive ability they have [when they age], the frustration they are going through can be very overwhelming.”

As sad as it sounds, these seniors turn to stubbornness and ego as a way of holding on to that last bit of control that they still have.

Although, there are also “difficult ones,” those who who choose to isolate themselves, and who refuse to interact with people. In such cases, Winnie explains that in the nursing home, they still try to show the elderly their presence and care in one way or another.

Drawing similarities between elderly and babies, Winnie said, “once you make them feel safe and comfortable, they are easily cared for.”

At Moral Home, the residents may suffer from different illnesses and each, their own sets of disabilities, but Winnie tells me that most of them are generally happy.

Having reached the point where they know that they are old and are ready to die, most of them would live every day to their fullest in the little ways they can, like eating, reading, or praying.

“Once, I have this resident who [had severe dementia and] is, on the whole, a very happy person. One day, she was just resting in the lounge after her coffee, then she just said to me in Cantonese ‘I am going to sleep, bye bye.’ She never woke up after that.”

“I think it’s better that way,” Winnie said, on passing on peacefully.

When I visited the home I also got to speak to this two sisters who had sold their house to live at the nursing home.

For 82-year-old Tan Nya Nya and her 83-year-old sister, their choice to live in a nursing home is for convenience, and to ensure that they get the physical support they need at their age. This came after Nya Nya fell down once and both her sister and her realise that they were unable to manage on their own if anything were to happen. Being able to socialise with the other residents of the home are perks that they enjoy too.

Nya Nya added, on seeing residents who don’t share the same happy-go-lucky attitude she has on life, “if you naughty, throw tantrum, [your family] also won’t [feel happy to visit you]. Correct? No point [being so gloomy]. Don’t think so much. Must be happy.”

Like Nya Nya, 82-year-old Uncle Lee also have an optimistic outlook on life, despite the fact that he lives alone in a one-room flat in Toa Payoh

His daily routine includes waking up in the wee hours of dawn for a walk around the small park right beside his home, going for his meals, and watching TV. Sometimes, he would hop on a bus that would take him to Jurong, Pasir Ris, and even Changi.

As he regaled me with his accounts of these ‘mini adventures’ he goes on when he is bored, he emphasised that at his age, there is nothing much to do except eat and watch TV, “what else can I do at this age?”

When I visited him with three volunteers on a Sunday night, he had cooked a pot of Bak Kut Teh for us. And as we sat in his living room savouring the soup, I felt a little like I was in my grandmothers’ old house again.

Although he lives alone, his house is filled with knickknacks. Chinese New Year decorations still adorn his walls and the side of his fridge. I couldn’t help but noticed that he also has four clocks on one wall.

“He really likes clocks. There’s more in his bedroom,” one of the volunteers laughed when I asked.

These volunteers first knew Uncle Lee through a programme initiated by Youth Corps Singapore, but have since grown closer to Uncle Lee and for the past two years, have been visiting him every month.

Once a driver who made a livelihood off driving for commercial and private businesses, Uncle Lee retired more than 20 years ago, when he sprained his hip. This work injury, however, has become a permanent problem at 82 years old.

“I cannot really walk long distances, unless I take breaks.”

Curious about my own mortality when I reach his age and avoiding being so rude as to ask Uncle Lee – whom I just met – about how he feels about death, I asked if there is anything he fears now that he is this old.

“No lah! Scared of what? Don’t need to be scared of anything [at this age].” He jested, “Last time, scared of my mother, but mother not around already, so there’s nothing to be scared of [anymore].”

Ever since his elder sister passed away, Uncle Lee’s only other family members are his nephew and nieces, whom still visits him occasionally.

Most days however, his humble lifestyle revolves around watching TV and eating, which he loves doing.

“Uncle is a food king!” One of the volunteers teased, “whenever we go out, he will tell us what’s good and where to find good food.”

Unable to comprehend living alone at his age, I asked Uncle Lee if he ever feels lonely.

His positive reply showed very much his outlook of life and in a way, it was also a reminder that happiness is a choice. He could very well dwell on what some would assume as unfortunate – he is old, never married, and living alone and off financial support from the government – but he had chosen to lead a simple and happy life instead.

A study done in 2004 found that seniors living alone were twice as likely as their peers to develop depressive symptoms. In the last stage of their lives, it can be very easy for seniors to feel frustrated and aimless.

Which is why, it is important not just for seniors to be able to adopt a positive mindset, but also for the people around them to empower them to do so.

Besides, our elderly citizens may be old and frail, but they have so much to offer in other ways.

Yong Shin, one of ‘Uncle Lee kids’ said, “They always say ‘seniors are a wealth of knowledge’, and I think [Uncle Lee] really displays that. You can tell that he really likes to share with you, about history or just whatever knowledge he has. He really likes interactions.”

And of all the conversations I have had with the seniors, the one thing that all of them have said, albeit not ad verbatim, is “we’re old already, what else can we do?”

To them, it is just better to lead a happy life and enjoy the simple things when you are already at that stage of life.

Also read: People Leave, But You Don’t Have To Be The One Left Behind.

Hikikomori In S’pore And Why Young People Are ‘Imprisoning’ Themselves In Their Room
How Can I Call Him Dad When He Threw Us To The Loan Sharks?
To Top