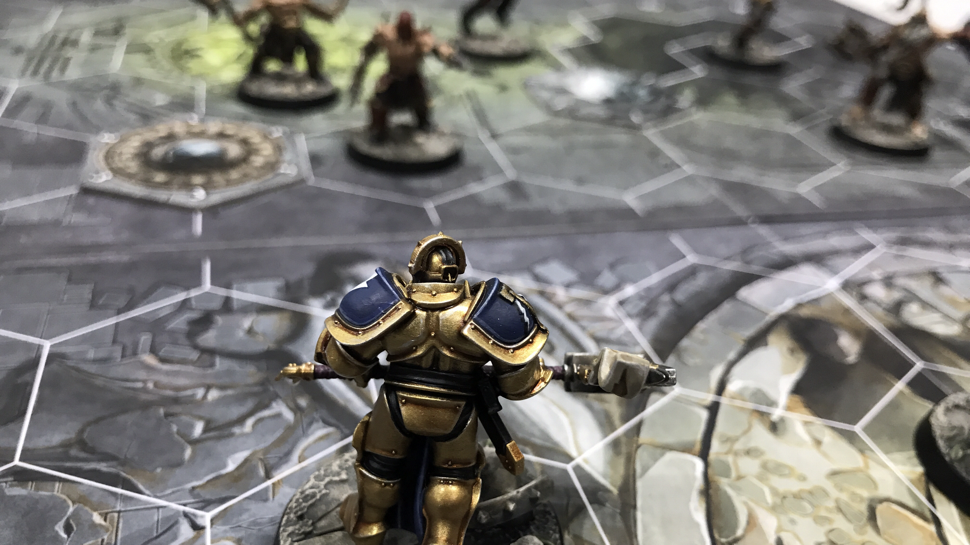 A Magic: The Gathering card weighs approximately 1.8 grams. In pure gold, that is worth about S$101.39.

The 55,000 grams me cannot even fetch that amount in two work-years.

The Alpha Black Lotus card is more valuable than me. In fact, it is one of the most valuable pieces in the world of Magic: The Gathering, a trading card game that has been around since the 90s.

The hottest fad back in our primary and secondary school days, most of us would have seen our brothers (or even sisters) and classmates playing it. And after school, the same group of boys would gather at the mama shop equivalent of a card game store back then.

On some levels, trading card games like Magic were cool back then, until technology and video games took over.

In this day and age where everything is digital however, we hardly see card or board games anymore, save for the Poker or Blackjack sessions during new year gatherings. Even toddlers have iPads these days.

Surprisingly though, tabletop gaming is a growing interest in Singapore. And it’s nostalgic to see that what was once a craze in our childhood days still popular. It is no longer just for the teenage boys either.

In fact, unbeknownst to most of us, we have a Singaporean world champion, who is a lawyer and father of two. Justin Phua, who is in his fifties, was the 2017 world champion in a miniatures game, Star Wars: X-Wing.

The win was a big deal as he was the first Asian to have won the tournament. Though it wasn’t that big of a news back in Singapore. Unlike academic, entrepreneurial, or sporting achievements, gaming isn’t as much appreciated or celebrated here, let alone tabletop gaming.

In The World Of Tabletop Games

For 29-year-old Travis Wong, who was crowned the 2017 Oceanic Champion for ‘A Game Of Thrones: The Living Card (AGOT: LCG) Game Version 2.0’, it is disheartening that such achievements (in the tabletop gaming world) go unnoticed, but support need not always be in the form of public recognition.

“There was little to no recognition of my win because no one really knew about it, but my close friends congratulated me, which was all I really needed. More than anything else, the win was a self-achievement.” Like Justin, Travis had to clock in hours at the tournament before he won in the finals, which lasted a “mentally-exhausting 1 hour 42 minutes.”

Meanwhile, we struggle with keeping a Monopoly game going at the one-hour mark.

Some dive into the world of tabletop gaming for leisure, but for competitive players like Travis, the pressure as a Singapore-represent at such international competitions is no different from athletes competing in international sports events.

“I was putting a lot of pressure on myself to win. I’ve trained for it [through regular gaming sessions] and analysed videos of high-level tournaments to prepare myself. The night before the top cut, I had nightmares and dreamt about the countless scenarios I would have to face.” Image Credit: Travis Wong
One of the many board game sessions he holds with his friends. In here, they are playing Rising Sun

His passion for AGOT: LCG has led him to start a group with his friends while juggling a full-time job in corporate compliance for his family business. Together with the group, Travis runs events and recognised tournament circuits for other AGOT: LCG players in Singapore and across Asia. Image Credit: Travis Wong
Commission works and special cards make up the prize pool for one of the tournaments they held

It was just about five years ago that Travis started looking into tabletop games, as a way to bring back the ‘human interaction’ element of gaming. Today, his queen-size bed storage is fully filled with his collection of board and card games.

The amount of money he has spent on this passion easily hits the four-digit range, which he fears “might be creeping into the five-digits territory soon,” as he got into painting miniatures last year — another facet of tabletop gaming that is extremely wallet-unfriendly. Essentially, tabletop games are any games that are played on tabletops.

Screen Capture from: Wikipedia
Game categories under the expansive umbrella of tabletop games Image Credit: Shopee
Casual card games like Cards Against Humanity, Unstable Unicorns, and the homegrown The Singaporean Dream are tabletop games that are easy to pick up for its price point and accessibility, so is our favourite Monopoly.

Among enthusiasts, trading card games like Magic remains wildly popular. There is even an online version of the game, which I learnt from veterans in the community, has helped boost interest in the actual, physical cards.

Miniatures games like the Warhammer 40,000 are another popular range of tabletop games for the more ‘hardcore players’. The game has even been described by The Guardian as ‘Heroin for middle-class nerds’ for its fascinating worlds and stories.

I’m guessing that the fair bit of (love) labour one has to put in before actually playing the game would have contributed to its appeal. Because the Warhammer game first requires players to assemble and paint their own miniatures models from boxes of model parts.

Making A Career Out Of Trading Magic

For another 28-year-old Mark, tabletop gaming has gone from a hobby to a career, and it all started from Pokémon.

From the Pokémon Trading Card Game he picked up in primary school, Mark went on to Magic: The Gathering. Image Credit: Wizards of the Coast

Likening it to chess, it was the strategic part of Magic’s gameplay that kept Mark invested, and was also what got him deeper into tabletop gaming.

“When I was about 16, my friends and I would buy a new board game and come together to strategise. We’ll spend hours trying to plan what’s the best way to play the game, and figuring out counter-strategies when we play.”

“Metagaming,” he told me over the phone, “that’s what really got me into it.”

When he was polytechnic, Mark started trading his Magic cards on eBay, earning $1000 to $1500 a month — a very decent sum for his age. He continued buying and selling cards to fund the lifestyle. At 21, his stint at a card company laid the path for him towards a profitable career out of trading cards.

Currently residing in Germany, Mark deals with sales and international trades of Magic cards for a card shop there.

As Magic has been around for more than 20 years, older cards that are no longer in production become rare collectibles that would fetch extravagant amounts from collectors and hardcore enthusiasts — like the Alpha Black Lotus card mentioned at the start.

To most of us, these cards are nothing more than ‘expensive cardboard’, but in the community, they seen as pieces of art. Mark explains, “the original painting of Black Lotus could go for millions of dollars for [it’s prestige in the community].”

Growing With The Gaming Community

Nicholas, who is in his forties, saw exactly that — the potential in tabletop gaming in Singapore, and he, like Mark, made a career out of his passion for the games.

Previously a freelance copywriter, Nicholas and his friends took over the reins of a game shop they used to frequent when they were designing their own board game. Now onto its seventh year, Gamersaurus Rex is a popular tabletop game store in Singapore.

For Nicholas, whose foray into tabletop gaming started when he picked up Dungeons & Dragons in secondary school, it is also heartening to see the growth of the community in Singapore.

Back in his days some 30 years ago, “there were just one or two [tabletop game shops]. Now, there are more than 10 shops.” Besides retail offerings for a wide range of tabletop games and accessories, the shop hosts regular events of their own as well. This includes game nights, painting workshops, and tournaments for a variety of games. Entire racks of Warhammer items at the store

Just like fans who buy into the world of Star Wars, Harry Potter, or Lord of The Rings, some tabletop games come with background stories, comics, merchandises, and even their own films.

“There are those that sell you their universes and creative settings, like the Warhammer games,” Nicholas explained as he held one of the miniature models he had been painting before I reached the store. There are also games that build upon existing geek or pop culture, like the the Star Wars: X-Wing Miniatures Game.

Although, for all its artistic and otherworldly appeal, it is the social aspect of tabletop gaming that keeps the crowds coming.

Most of us perceive tabletop gaming to be for reclusive nerds, but tabletop gaming is a community-based game by nature, and a lot more of a social activity than e-gaming, for example.

Once a “pretty reclusive person”, Travis have “made countless friends through this hobby, which is weird since this hobby is thought to be full of nerds and introverts.”

For Mark, “a full gaming experience for me is something that comes with social interaction. I really like meeting people, talking face-to-face, and discussing game strategies. It’s more wholesome.”

Business aside, Mark runs several Facebook groups as well, where he continues to hold events like community meet-ups for the gamers.

“It is the community building that I really enjoy in tabletop gaming. It’s like grouping all the ‘misfits’ in life, people from all walks of life just coming together to enjoy a game.”

As someone who is also trying to make a living through connections, Mark highlighted the social fabric created by this ‘hobby’.

“Even if you’re introverted, you will open up when you’re relaxed and having fun. You bond over the game and you start talking about each other’s life.”

Mark not only knows people from all over the world now because of tabletop gaming, he has seen many people find jobs merely through playing with someone else who was hiring.

Currently engaged, Travis’ fiancée emphasised that as with all things, of course, balance is important — and probably the line between obsession and hobby.

“I’m very supportive of him because I understand it’s his hobby. I don’t dislike board games too. It’s a great way to bond and relax. I think that we just need to have a good balance of our priorities and don’t go overboard (pun intended).”

Though, even with all the good things that have come for Travis, Mark, Nicholas, and other gamers in the community, they will remain as ‘anti-social nerds and geeks’ to the uninitiated. For them, however, it’s not a big deal.

“Geeks are also cool kids nowaday.” They all told me. And it’s true, considering how Razer’s CEO, Min-Liang Tan, has (a cult following of) more than 560K followers on his Facebook page.

Also read: What The Heck Do Dumpster Divers Do In Singapore?.

Paying It Forward: Why Volunteering During Chinese New Year Was More Valuable Than Any Angbao
Hikikomori In S’pore And Why Young People Are ‘Imprisoning’ Themselves In Their Room
To Top