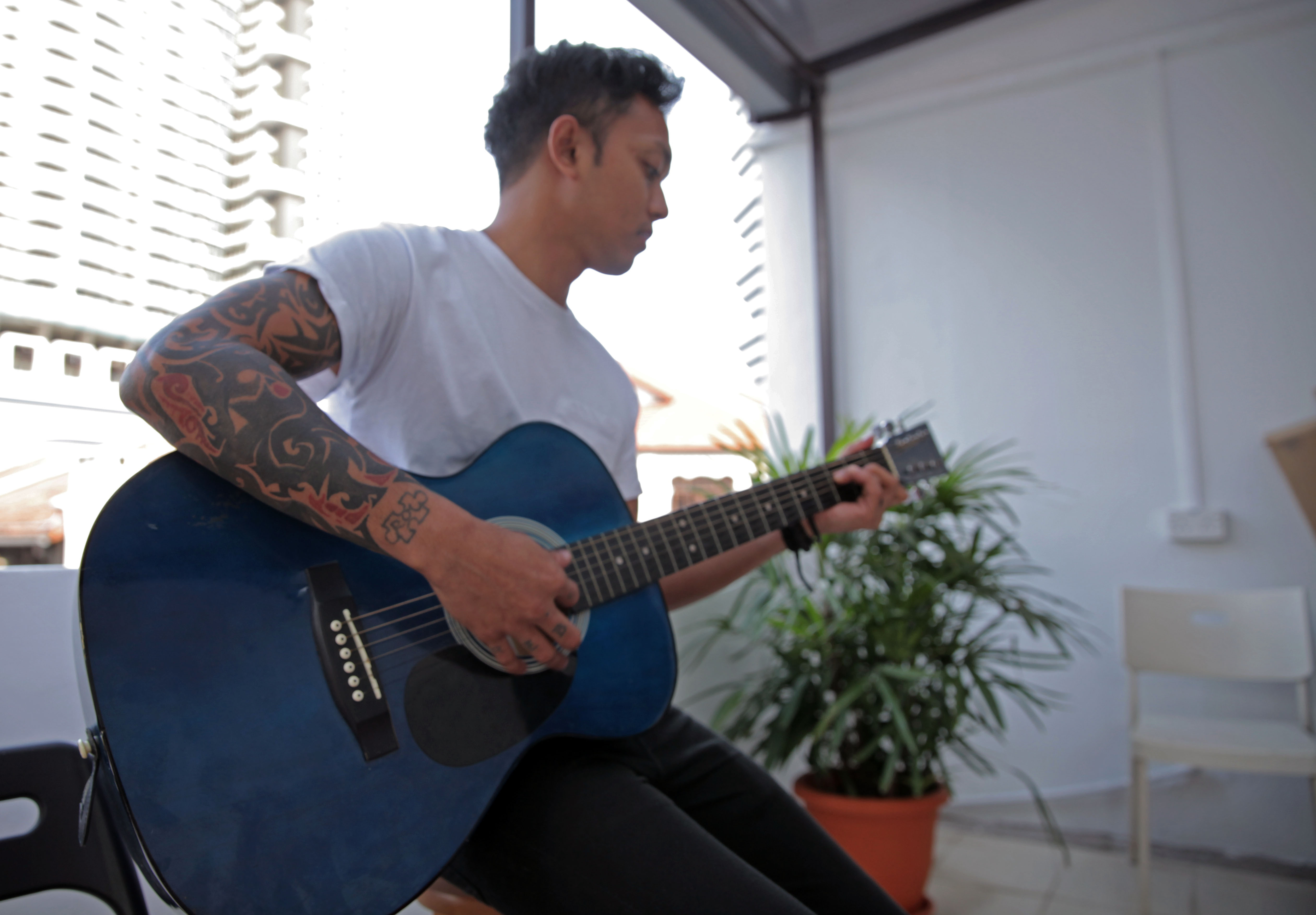 If one were to walk past Crow on the streets, one would easily pass him off as ‘one of those matreps’. After all, he fits perfectly into that mould: Malay, tattooed arms, smokes, plays the guitar and sings.

His appearance and the stereotypical label that comes with it naturally meant that he has to put in twice the effort to earn the respect of society. What makes it that much harder is the stain of a criminal record that follows him for life.

When I met Crow at Orita Sinclair School of Design & Music where he’s studying however, his calm and friendly disposition is a complete opposite of who he described himself to be in his wayward adolescent years.

If I wasn’t aware of his past from a video feature our team did of him a year ago, I will never fathom that he was once a prominent gang member and had served six years in prison for gang-related activities and what was classified as a murder case.

He spoke briefly about his journey in our video so when I caught up with him last week, I wanted to dive deeper into how everything started and also how much life has changed for him since the team last met him.

Growing Up In A Different World

Unlike average Singaporeans, Crow never had a proper family growing up. Neither did he really have a home. Home was wherever the person his single mother paid to look after him stayed, for she had to slog day and night to support him and his stepbrother. An old photo that Crow kept of his mum and him

With no family and no place he could truly call home, he sought solace in his friends.

The many fights he got into with his mum for his lack of interest in studies pushed him further down the wrong path. At 14, he dropped out of school and a year later, joined a gang.

“All my friends started joining the gang so I thought, why not? Since they are all in there, I’ll just join them too.”

It is from thereon that Crow fell into the typical ‘gangster lifestyle’. He got tattooed, went clubbing, took drugs, sold drugs, got into fights, slashed and hurt many people with the use of weapons. To an outsider, these are acts done by people who do not know what they are doing. And this isn’t far from the truth. These made up Crow’s teenage years. A typical day for Crow back then include hanging out at the club, which tend to lead to fights

Crow’s world was about survival in the most primal sense. Where fights are default solutions to conflicts, violence became normalised behaviour for him.

“I’m someone who want to be the best so I did whatever is expected of me and do it well to prove my worth in the gang.”

Soon enough, Crow climbed the ranks and made a name for himself in the ‘gang scene’. Yet, none of his family members knew about his identity.

Things took a turn when Crow was 19. After surviving from a fight that left him with injuries so bad he was admitted to the ICU, and seeing his crying mother at the foot of his bed, the mother and child reconciled. That moment brought back long lost feelings of love and concern that he had always longed for from her.

Their relationship improved but just four months after, she passed away from a sudden illness.

It was at that point that Crow started reflecting and decided to leave the gang.

At 19 and serving NS however, it wasn’t long before Crow found himself back in the predicament of going back to his old days due to financial pressures. With $350 of his $520 monthly allowance going towards the rental of his mum’s flat, the remaining was barely enough to cover utilities, food, and transport among other expenses. He started selling cigarettes to earn and eventually succumbed to selling drugs when the bills piled up. One thing led to the other and he was soon back in his old gang. This time round, as a headman of a particular territory with over 20 boys under him.

The Law Caught Up

Things started going South when a huge fight left one of his gang members dead. Knowing that the investigations will lead the police to him, he went into hiding at various hotels and friends’ houses. He was caught in the end, along with all his boys when they were celebrating Ramadan back in his rental home.

Detained by MHA under the Criminal Law Act and sent to prison immediately with no release date came as a shock to Crow at first.

“I knew what I was doing wasn’t right but I never imagined actually being in prison.”

Prison life was undoubtedly hard and it took him more than a year to accustom himself to the new life. Facing four walls all day, losing the freedom to do what he wants to do, and having to perform the same routine over and over again was a huge mental challenge.

The hardest part, however, is that there was no ‘end date’ to all of that because he did not know when he was going to be released, or whether he was even going to be released. Many times, Crow had to distract himself from such depressing thoughts by doing things he never would have done prior, like reading.
Disgruntled by how the legislation could lock anyone up without any release date, he decided to ‘take revenge’, “I was thinking that since they are going to do this to me, fine, I will take full advantage of whatever facilities or resources they have.”

Who knew that that motivation was what became the turning point of Crow’s life. After getting into Prison School and realising that he could actually do anything well if he puts his mind to it, he went on to complete his O-levels and A-levels there. Most of all, as he was exposed to more knowledge, he begin to realise what he wanted to do when he gets out.

“I want to be a better me, to do good things for myself and for people. If not for myself, I owe it to all my loved ones who have visited me to do so.”

After six years, Crow finally got his second chance in life. Leaving prison and his past behind in 2016, he decided to use what he experienced and channel his learnings towards touching the lives of people through music. “Music can make people feel things and it’s amazing that within that few minutes, you can change someone’s life or perspective. I want to do that with my music.”

He went on to pursue a two year part-time Diploma in Music Production and Audio Engineering. As a personal bid to prove his self-worth, Crow also works on freelance video editing projects to earn his own keep despite receiving full sponsorship from Yellow Ribbon project to help his reintegration into society.

When asked if he is worried about potential trouble from his past for sharing about it, Crow explained humbly, “there’s a lot of genuinely nice people who have made bad choices in life, but lack the motivation or courage to change. I hope that my story can inspire them, that they can change too if they want to.”

With only a few days to his graduation show on 15 October where he will be performing his first Single, Dunia Duit(Malay for ‘World of Money’), I wondered if the 29-year-old regrets his past.

“I wouldn’t say I regret because if not for all the things that I have done and gone through, I will probably still be that naive guy with no clue what he’s doing with his life.”

Beyond the social stigma, being branded an ex-offender comes with real impediments like not being to travel, having a curfew, and being restricted from certain places. Regardless, Crow doesn’t see his past actions as a hindrance to his future.

When I asked if he feels the same way with his mother however, I could tell the remorse in the slight quiver in his voice.

“My mum worked very hard to make ends meet so my only regret is not being able to show her my O-level results. I’ve gone on to succeed in many positive things but she will never be able to witness it.”

A Walk To Remember – I Visited Bukit Brown Cemetery On Hungry Ghost Festival
Legit Or Not? A Sceptical Millennial Tries Hypnotherapy By A Professional In Singapore
To Top