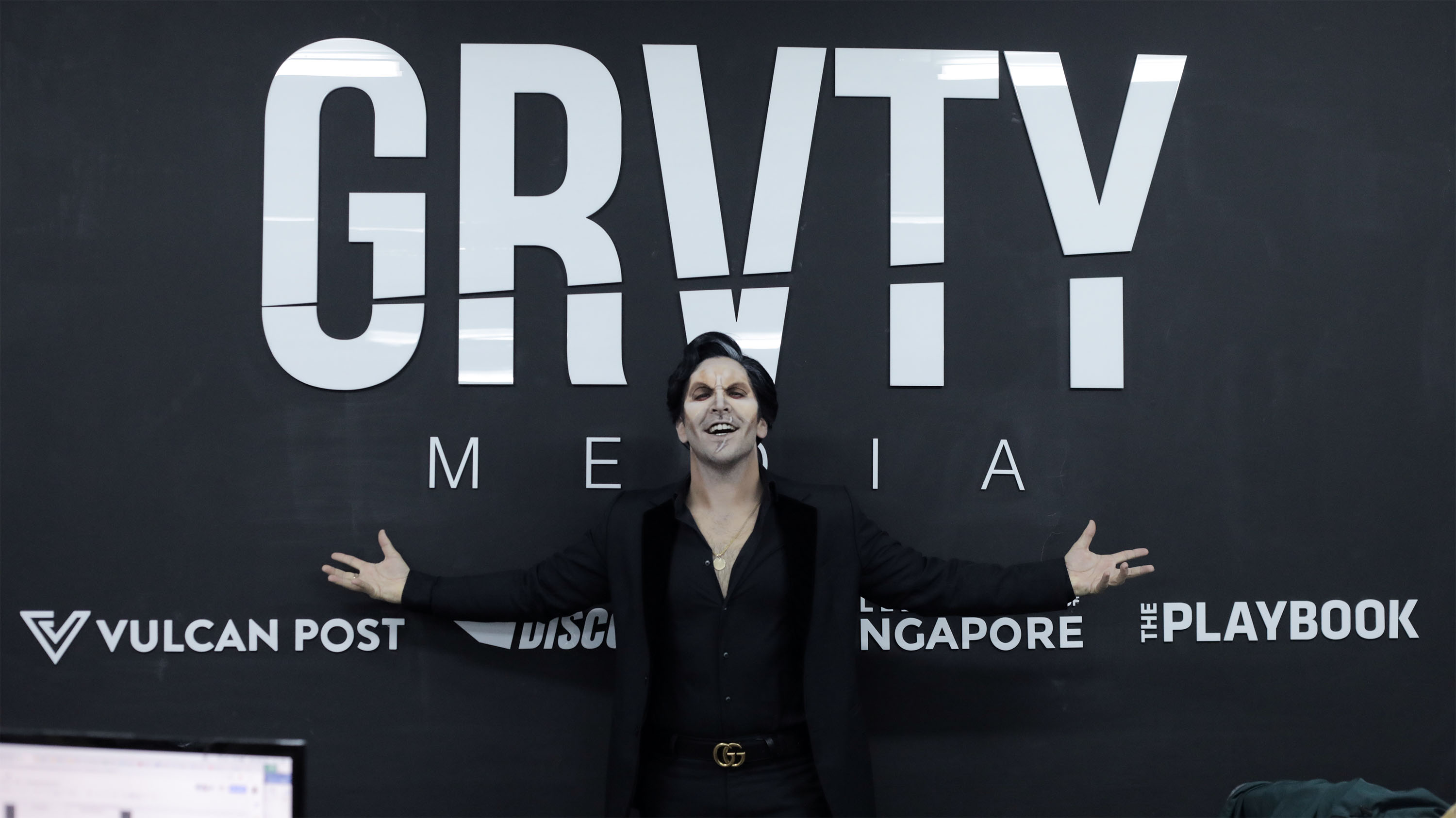 Acknowledged by only the greatest devils in history, the special Netherworldly guest from the USS’ Halloween Horror Nights 8 is none other than Gideon Grim. Having made his first appearance in HHN8 after thousands of years hunting down people who attempt to flee from death, the Grim Reaper turned Motivational Death Coach is dubbed the ‘Scariest Man Alive’.

With Halloween around the corner and us being too chicken busy for HHN8, we invited Gideon Grim himself to visit us in office. Because what other way to get a taste of HHN8 within the safety confines of our office than to meet the one man from the annual scarefest whom Satan reviewed “The only man I fear”?

Contrary to popular belief, Gideon does not encourage or teach people about death as a Motivational Death Coach. Rather the leading expert on death works to pass on his invaluable skills of the trade through his DEAD Talks seminars, where he motivates people to bring back the BOO.

After Gideon showed us how he channels his inner darkness to bring out the BOO, which gave some of us a much-needed wake-me-up from the dreaded afternoon food coma, we had a chat with him to learn more about life as a Motivational Death Coach.

Our writer smiling, but feeling nervous as hell deep inside

How can we bring back our BOO?

I won’t reveal too much about the four keys to highly effective scaring as you’ll have to attend my seminar to learn about that. But first, you have to have the passion to scare. Find what gives you that adrenaline rush of scaring people to discover your own scare tactics.

You also have to be spontaneous, have a heart of darkness, and love cats.

How about the evil laughter? How can we we cackle like you?
Well, I was born into this world cackling so it’s in my blood. But thinking about dark thoughts helps. For me, I think about puppies dying.

Can I scare my boss into giving me a raise?
It’s a good idea but I haven’t seen anyone done that. You can definitely try but with caution, because it’s a fine line between getting the raise and getting fired.

Do you get paid?
I get paid in tortured screams. It’s somewhat the currency in my trade, sort of like bitcoins.

Based on your experience as an ex-Grim Reaper, what scares Singaporeans the most?
Not having the aircon on, MRT delays, and the general election – don’t ask me why.

Do you still have your Grim Reaper getup?

Yes. I still don my cloak once in awhile and the scythe makes for a good back scratcher sometimes.

Will we see more of Gideon Grim around after HHN8?
I do hope to hold my seminars around Singapore and around the world, to motivate more people to embrace darkness. To get people on their feet and slaughter the competition.

Because we’re all big on those inspirational quotes, we we got Gideon to leave us with four pieces of inspiration for life (and death). We leave you with these four alternative motivational posters. Such words of wisdom. And what a gift it was from Gideon to grace us with his presence amidst his busy schedule, which involves feeding his cat, Muffin the Murderer, watching the news to get his daily inspiration from scary things like global warming, and scaring people.

If do wish to frighten yourself and catch Gideon in action and the myriad of other scares HHN8 has in store for you, good luck, have fun, and brace yourself for “infinite fear”. Get your tickets here while you still can!

How Green Is The Grass On The Other Side? 4 Singaporeans Share The Realities Of Living Abroad
“Gives Up Seat, Lady Not Pregnant” And More Six-Word ‘Horror’ Stories: Singapore Edition
To Top
Loading Comments...
Comment
×