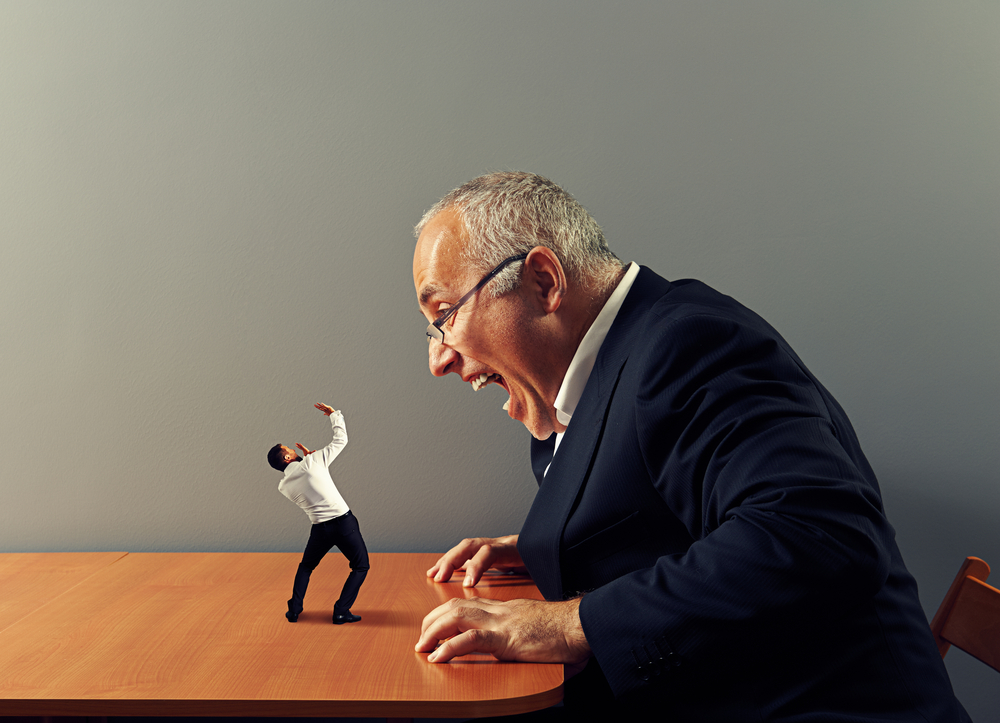 When you step into the working world, you’ll realise that you’d see your bosses and colleagues more than your family and friends. And with most of your waking hours spent at work, what you do at work makes a big difference to your daily well-being and mental health.

While you probably want to be doing something you enjoy yet pays you enough to survive, there are other deal-breakers to look out for in a job.

No matter how much you love what you do or how chummy you are with your colleagues, you’ll still go nuts if you have a micro-manager nitpicking every single piece of your work, or a perpetually PMS-ey boss who lashes out at you for no particular reason.

For the lucky ones, everything has been smooth-sailing. But for most of us, we’ve had to suck it up with difficult bosses at some point of our working lives.

We reached out to some Singapore millennials on the most terrible experiences they have had with bosses. Here are their horror stories.

1. “They made staff pay for ‘errors’, and spread rumours”

They’d ask staff to compensate monetarily for errors, even if it’s not exactly the staff’s fault. For example, if we had to spend more for a project than we initially budgeted for because client expected more or a vendor increased their charges, we have to pay that amount ourselves. It’s also worth noting that we weren’t getting any allowance, neither were we get commission for any sales closed or project done. More often than not, these are small amounts that the company can cover without making a loss.

The bosses cut down money on a lot of things to save money for the company, are very stingy in pay increment, and they’d even cut the pay of part-timers. Yet, they were able to buy new branded cars themselves – although not directly linked, this didn’t reflect well on their generosity towards staff.

I was getting a form of non-monetary benefit as part of my remuneration package. Back then, my boss promised me that if that benefit happened to be removed, I’d get a pay increment of $200 – $300.

When that benefit got removed because a colleague found out about it and made noise, my boss said that he never mentioned the pay increment. To that, I said to him, “you said that you remember (about the benefit when we started talking about this) earlier!” To which he replied, “I changed my mind.”

When I resigned, there were rumours about my resignation and the disagreements between the boss and me spreading in the office. To regain the trust of the staff in them, my bosses started spreading fake stories about me after I left. They told the whole company about me being ungrateful to them and stealing their clients, making themselves look like the ‘victim’. 2. “She didn’t let me mingle with colleagues, and didn’t want to pay me”

I wasn’t too keen on settling on this job but I was kind of pressured into it. The boss seemed to really need someone and I decided to help. She wanted me to sign the contract on the day of the interview, but I requested time to consider. I eventually agreed the next day.

The moment I entered, I was clearing so many backlog from the previous staff, such as re-organising all my boss’ documents and tidying her office, which were all in a big mess. Admittedly, the load wasn’t too unmanageable. However, I did make mistakes as a newcomer.

One of my daily tasks was to send reminder texts to consultants who had sessions with my boss that day, even though they already knew their schedules with the boss. Once, I missed out one of the consultants, and my boss started making snide remarks at me, like how my focus seem to be on dance and not on work.

I do admit to the few blunders I made during my first few days on the job, but I was honestly doing my best to fulfill her expectations. Those personal remarks really weren’t necessary. Furthermore, the mistakes didn’t result in anything major. I also learnt from my colleague that my boss was already intending to replace me, even on my first few days there.

Moving forward, things didn’t get better. I wasn’t allowed to mingle with colleagues from other departments. As a HR and PA, I had access to my boss’ schedule and other personal details, so she feared that it’d be a conflict of interest for me to hang out with others in the company.

The ‘best part’ came when she told me about a work trip she was going on. She believed that when she was away, I would have nothing to do, and she wasn’t willing to pay me for that. She said that since I was under probation, she wouldn’t need me around anyway. Nowhere in the contract was it stated that this could be done. That was the last straw. I wasn’t going to sit around and be treated like trash, so I told her that I quit.

3. “He ‘spoils’ the machines and keeps quiet about it”

We often have to do maintenance in the engineering line. Whenever that happens, this supervisor would go around meddling with tools and will seem to be physically working on various equipment. But it’s obvious to everyone in the department that he does that to put on a show that he is “helping”. He’ll then sit in front of the computer for the entire day, and nobody knows what he actually does.

He has very ‘itchy hands’ and will try to modify our machines to make them work more efficiently. But if the machines stop working after his ‘modification’, he will just return to his office quietly, leaving us to figure out what happened to the machines. Most of the time he makes our work tougher than it should be, as we often end up spending half our day fixing his ‘modification’.

We couldn’t question him either, because he will just reply with a lot of rubbish to shut us up. He’ll criticise others before acknowledging his own mistakes. He’s a typical ‘all talk, no action’ character. As a supervisor and boss, you should lead by example and not be irresponsible like this.

4. “She insisted that she’s a good friend and boss but messed with my private life”

I was about 4 months old with the hotel and she was my new marketing manager who came aboard when I was on a holiday trip. We were initially on very good terms and bonded well as we were both from girls school. She was very nice and we were close friends.

Then, she started becoming very bossy and bitchy. She’d mentally torture me by making complaints to my GM that I was rude to her (I shouted at her), adding that I wasn’t producing quality work and insisted on getting me fired or even hiring a more suitable intern to take over my role (note that I was at an executive level). She made me do all her dirty work and would claim credit whenever opportunity arose. But all these are still not the main point.

Throughout this whole ordeal, she insisted that she’s a really good friend. However, she had probed into and meddled with my personal life and not in a good way (so much that I had to block her on Facebook). I had the misfortune of introducing her to my then boyfriend’s mother when we bumped into each other on our work trip. She went to the extent of badmouthing me behind my back to my then boyfriend’s mother, accusing me of being rude, lazy, irresponsible and very difficult to work with.

I loved my job and the people there, but she made me give it all up. When I tendered, she was exceptionally nice to me when I was serving notice. Then on my very last day, she gave me hell, releasing her anger on me because she haven’t found someone to take over me. It was so bad, my HR in-charge stepped in and stood up for me. And it didn’t just stop when I left. She still had the balls to message and invite my then boyfriend’s mother to her housewarming party.

5.“I was was paid peanuts to be a one-man show”

I worked as a marketing executive, managing branding and promotions for a new cafe chain. However, I ended up being a one-man show who does opening and closing, washing the cups, mopping the floor, handling renovation works, hire part-timers, order ingredients, and was also the cashier, barista and overall F&B manager.

As a fresh grad then, I was very eager and willing to learn. My boss had a way with manipulating that mindset, making everything seem like it was part of my job. Whenever he suddenly needed something, he will just throw me in to get it done. When he hired a chef, he made me go through and learn all the F&B SOPs together with the chef.

Overtime, it became clear that he only cared about the success of the cafe. He never bothered about welfare. Every time he appeared, he’ll only ask about the sales for that day, or whether I’ve picked up latte art yet.

When I resigned, I didn’t even have time to go back to office to pack my things, I was still stuck in the cafe all day. Bear in mind that I was literally doing everything but only getting paid for the marketing executive job that I signed up for.”

If you are fortunate enough to not have experience any of such office nightmares, good for you! And if you have, we’re with you. Perhaps you can even share your tales with us – just don’t get yourself into any trouble!

Also read, 10 Brutal Punishments We Suffered As Kids – As Told By Singaporeans.

My Sexuality, My Right: “A Stranger Wanted Me To Apologise For My ‘Lesbian Appearance'”
Shared by Ex-NSFs: Bro Tips You Wish You Knew Before Enlisting
To Top