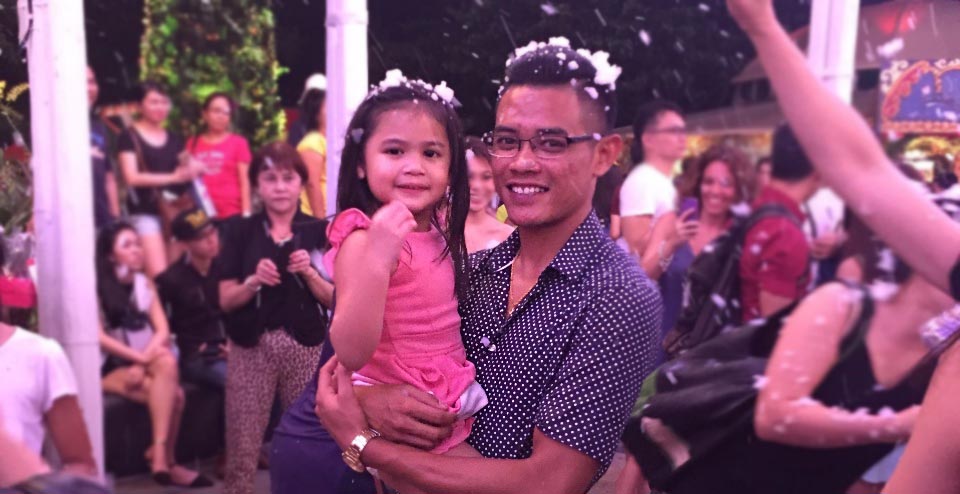 As we edge into our twenties, we begin to accept the fact that we are really no longer kids. Most of us would be either completing our studies or building up a career. It’s scary to even think of having a baby ourselves.

Being a parent is no easy feat. It’s even tougher when you’re young and hadn’t planned to be one yet. We often hear about the trials and tribulations from girls who went through teenage pregnancy, or from being a young mother. However, rarely do we get to hear from the dads who’ve stuck by the ladies through such situations.

This Father’s Day, we reached out to 29-year-old Charles John (CJ). This is his story of being a young father to a child out of wedlock.

Getting ‘Caught In A Situation’ CJ and Mieko when they were dating

Back then, I had been dating my girlfriend, Mieko, for 2 years. We both used to smoke and drink a lot, but one day she just couldn’t stand the smell of smoke anymore. That was when we suspected that she could be pregnant. Furthermore, she had missed her period for one and a half months.

It was only after a pregnancy test kit from 7-11 and a visit to polyclinic later that our suspicions were confirmed. Mieko was pregnant. I was going to be a father.

Her Parents Gave An Ultimatum

I was shocked, of course. A part of me was in panic mode because we were young and not married. But at the same time, I was happy and excited that we were going to have our own flesh and blood.

We didn’t have big doubts on keeping the baby because we felt it was only right to, but our parents didn’t take it very well.

When Mieko told her parents, they gave her an ultimatum to abort the baby or be thrown out of the house. We both struggled with the decision to abort after that. But after seeing the first ultrasound at the hospital – we just couldn’t bear to abort.

Even after Mieko told her parents, I struggled to break the news to mine. Mieko eventually texted my mother about it and my mother was shocked. She reasoned that life would be difficult as we were financially very unstable.

To add on to the stress we were facing, she is also a practicing Catholic so she wanted Mieko and I to get married before our baby was born. However, Mieko was only 18 and considered a minor so she needed consent from her parents for marriage. Her parents did not approve since Mieko was still very young. We eventually waited till she was 21 and got married. CJ and Mieko getting married

Mieko was only 18 then and working part-time while doing her diploma. I was 22 and just started my first full-time job at Keppel shipyard. Reality hit that we weren’t financially stable to support ourselves, much less bring a child up. My worries were mainly the financial aspects, but this can be worked on.

On the negative thoughts people may have of me, I think nobody dared to say negative things to me directly. But I can’t deny that there were sentiments that bothered me slightly. I just ignored it and concentrated on our happiness. CJ with his family

Despite everything, Mieko and I decided to keep the baby. We are Roman Catholics and it is against our religion to abort a baby because we believe that every child is a gift from God.

We also felt that this would be a new and interesting chapter of our lives together that will better us in our lifestyles, making us more responsible adults.

No Longer Young And Wild

There were definitely many things that we had to change. Before, we would spend freely without thinking. I’d spend a lot on things like cigarettes and alcohol, and go clubbing every week.

When Dayna happened, I stayed home more often so I could save more money. I told myself that I’d never allow myself to go ‘bankrupt’ ever again. We’ve been thriftier. We don’t go clubbing often anymore. Even when we do, it’s probably once in a few months. Our entire paycheck now goes towards daily necessities, bills, and our kids.

Compared to our younger, wilder days, we now meet up with friends over meals or they would come over to our place. We’d just chill at night after the girls have gone to sleep and maybe have a few drinks to relax.

As a person, I became much more patient. Instead of letting my temper get the better of me, I’ve learnt to take a breath and keep my cool.

Being A Father Is Rewarding CJ and his family today

Becoming a father in an unplanned pregnancy and before marriage has its challenges.

There were many things that I had to change – it’s no longer a care-free lifestyle where I can do whatever I wanted. If my baby girls cried for food in the middle of the night, I’d wake up to feed them. My priority is now my girls. And it’s all worth it when I see them smiling and laughing back at me. As a father, that’s also the most rewarding part – to see your children happy.

If there are friends who find themselves in the same position as I was, I’d say, “Whatever it is, if you have a strong feeling on a decision and feel that it’s right, just go for it. Don’t follow people’s decisions and regret on it later.”

Also read These 14 Heartwarming Stories Show That A Mother’s Love Is Like No Other.

6 S’poreans Share The Heartbreaking Reasons They Broke Up Their Long Term Relationships
Sexual Harassment Not That Unusual – S’porean Girls Reveal Their Nasty Encounters With Perverts
To Top
Loading Comments...
Comment
×