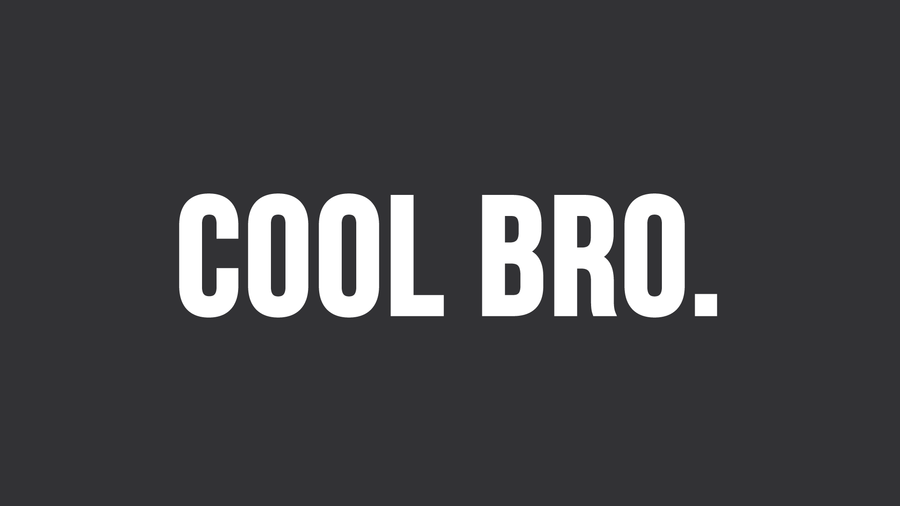 An article has been making its rounds on the Internet, and this time, it has to do with the use of the words ‘bro’, ‘dude’, and ‘mate’. And no, it’s not being shared for commendable reasons.

Straightforwardly titled ‘Guys, please stop saying ‘bro’, ‘dude’, and ‘mate’’, writer John Lui condemned the use of these terms that are commonplace in our everyday conversations.

In what reads like an open letter to Singaporeans, he called out users of these terms for doing so to “act superior [without wanting to] to sound like a prat, even when he is being a gigantic prat”, also implying that people tend to use terms like ‘bro’ when asking for a favour.

We’re not sure if the article drew inspiration from Mr Tan Kin Lian’s famous Facebook comment from a while back: “I find the word dude to be rather rude.”

A statement that was made innocently enough, it attracted a mob of troll commenters poking fun at him. The post has since been taken down, but as we all know, once you do something remotely embarrassing online, the trail never disappears.

You would think one would know better than to make such a remark from this example. It therefore comes as no surprise that this particular #justsaying opinion piece drew the ire of Singapore’s netizens.

We broke down the article in all its thoughtful observations, and here’s what we have to say:

This Is Our Social Fabric, Mate

“Bro” is often followed by “can I get a discount?” after a deal is set. It is invoking the bro code at the last minute, which is strictly brohibited unless there has been a brolific and brogressive display of broactive behaviour. Get with the brogramme, guys.

The writer suggests the word ‘bro’ is often used in the context of asking a favour. The truth is the word appears in far more varied contexts.

We use ‘bro’ to start a conversation amicably with people. “Bro, long time no see!” creates a sense of friendship that’s not strictly restricted to people blood-related to you.

When you forget someone’s name, ‘bro’ is your savior. You don’t want to come across as indifferent. Be polite.

When you are feeling paiseh or are talking about something that might be slightly embarrassing, ‘bro’ helps to tone it down. “Bro, your fly is open.”

When you are giving advice or are trying to calm a friend down, ‘bro’ helps keep the conversation cordial and relaxed. “Eh bro, don’t angry lah!” versus “Oi, don’t angry lah!” While the first may be annoying, the second will surely fuel your rage.

2. Punctuating your sentences with “Bro”

Another thing about “bro” – it is the favourite of drive-time deejays. It is used in the sorts of ways – as punctuation, as a punchline, as a time-filler – that make me want to punch the car radio.

One thing the writer does get right is that ‘bro’ is often used as a sort of punctuation.

While ‘dude’ and ‘mate’ aren’t as common (who says ‘mate’ in Singapore, anyway?), ‘bro’ is so widely used in Singapore, it is a part of our social fabric. Just like we use Singlish terms such as ‘lah’ and ‘lor’ to express things no other words can, ‘bro’ has come to be a way we ‘prefix’ our conversations.

What other word carries the same meaning and essence as ‘bro’? None that I can think of.

3. To “Bro” is to give a false sense of closeness

For women, I’ve been told their equivalent of “mate” or “bro” is “babe”. Like “bro”, “babe” is meant to flatter, implying that the speaker has granted the other the wonderful gift of closeness, thus giving the user of the word the right to be a total donkey.

What’s wrong with using ‘mate’, ‘bro’, or ‘babe’ to “grant the other party the wonderful gift of closeness”? Is it such a terrible thing to build rapport in conversations? Should we instead be keeping our conversational partners at arm’s length?

Last I checked, no one benefits from that. No one enjoys that interaction, no new relationships can bud from there… And really, that would be an awkward interaction.

To Bro Or Not To Bro

So what do you think? Passionately believe the word ‘bro’ should be abolished? Don’t really care? To bro or not to bro? You decide.

The Breakup Reasons These 10 S’poreans Gave Their Ex-es Will Make You Say ‘WTF’
Singaporeans Get Triggered So Easily – And Lately It Seems To Be All About Race
To Top
Loading Comments...
Comment
×