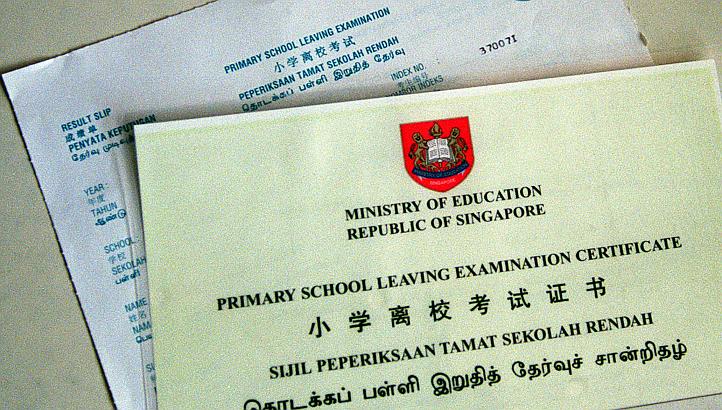 Try as we might, it will always haunt the children.

Just as it’s been over the past few years, so this year’s release of PSLE results has come with the same dramatic tropes. There were calls, platitudes and ST letters urging parents to remember that “it’s just an exam”, and “it doesn’t determine your child’s future”.

There was the standard scandal of parent punishing their child for not scoring high enough–this time, it involved a confiscated Nintendo DS. There was the outraged reactions, with one of the top rated comments reading “This is the kind of thing that make our young children jump down from buildings”. Topping it all off was the viral movement where Singaporeans shared their PSLE results, along with where they are in life now, which amounted to a whole lot of humble-bragging.

Perhaps next year, the Government will announce yet another departure from the PSLE system towards the new favourite phrase–a more “holistic development”, as was announced this year, along with the announcement that a new PSLE grading system will be implemented from 2021 onwards. Sports, character and volunteer work will become new potential criteria for admission into top schools, and all this on top of grades.

Honestly, I am cynical that all this will amount to any significant change.

Instead, we will probably see parents pushing their kids to excel in all kinds of sports, trying to get them into the national teams so they can become the next Joseph Schooling. Children will be signed up for all kinds of leadership programmes in a bid to develop their character. Perhaps there will be an explosion of volunteer work at various homes and hospices, as kids rush to prove their hearts for the disadvantaged members of the community. All that while having to do well in their studies.

My point is that while we can try to turn the focus away from grades and onto the child’s non-academic merits, at the end of the day, the Kiasu mentality reigns supreme. We’ve become so obsessed with grades that our only alternative to grades are even more grades.

If our children are not multi-talented, Renaissance-type boys and girls, they will not thrive as productive members of society. Instead of decreasing stress levels, we give children more areas they must perform well in, hammering in the notion that at the end of the day, a child’s worth and sense of identity are tied to what he can or cannot accomplish.

Woe to the child who learns more slowly than the rest and is unable to excel yet in sports or their studies in time for Primary 6 or Secondary 4; a lacklustre school certificate from his first ten years of education now potentially determines where he can go from here. At this point, most roads already lead down.

It All Boils Down To Socio-Economic Status

Crucially, a mere change in the PSLE marking scheme or the way children are streamed fails to account for the biggest problem that plagues Singapore’s meritocracy: the uneven playing field produced by socio-economic inequality, as well as a system of meritocracy that more deeply entrenches this inequality.

Both Donald Low, a senior lecturer at the Lee Kuan Yew School of Public Policy and Andrew Yeo, a research assistant at the Institute of Policy Studies, have written extensively on this particularly pernicious problem. Low has talked about how it is important to ensure equal access to opportunities, given that people start out with different talents and resources. He warns against a “Wall Street Meritocracy”, where a “self-justifying, entitlement narrative” emerges and “inequality is [seen] as a natural consequence of an efficient and normatively desirable system”.

Yeo states that “students who score well in the Primary School Leaving Examination, are disproportionately populated by students staying in private housing.” He goes on to say, “More than half the students in the top secondary schools have fathers who are university graduates, while this is only the case for about 10% of those in neighbourhood schools”.

Essentially, parents with greater income because of greater educational status give rise to children with greater access to high quality tuition services and who then have greater opportunity to enter the top schools, and this cycle continues.

This problem is not exclusive to academic achievement. Sports in Singapore doesn’t exactly have a reputation for being the most well-funded; Schooling’s parents had to make heavy financial sacrifices in order to send him to the USA to train, including selling their house. As such, children who come from more well-to-do families will undoubtedly have an unfair advantage in ensuring their success, whether in their studies or extra-curricular activities.

On the flip side, those lower down the socio-economic ladder not only do not have access to fancy tuition classes, they are saddled with other responsibilities, like having to work to support their parents. How then, do these children explore their talents in sports or art?

The school you go to also has a part to play in the programmes you’re exposed to. You can’t expect the same breadth or quality of programmes from a sprawling elite school like Hwa Chong Institution as say, Damai Secondary School, a neighbourhood school that is set to disappear once it merges with Bedok Green in 2018; the funding and budget of Damai simply pales in comparison.

Now that the emphasis no longer rests on grades alone, the disadvantages of going to a neighbourhood school is accordingly amplified. It doesn’t matter whether we emphasise the child’s grades, his sporting abilities or his artistic talents; as Low argues, without “redistributive measures, meritocracy rests on increasingly shaky and tenuous foundations”.

Recognizing The Flip Side Of Meritocracy

In a country like ours, where everything is judged by Key Performance Indicators, a measure of inequality is to be expected because people are not equal in their abilities. But the issue here is that this inequality can carry on to the next generation, granting the children of parents higher up on the socio-economic ladder an advantage over others, rendering meritocracy just as guilty as race/religion/gender/caste systems of entrenching inequality.

The key assumption that meritocracy is the best means of social mobility must therefore be re-examined. Otherwise, we risk deluding ourselves into thinking we have a perfect system when what we have in place instead, is one that creates a permanent underclass.