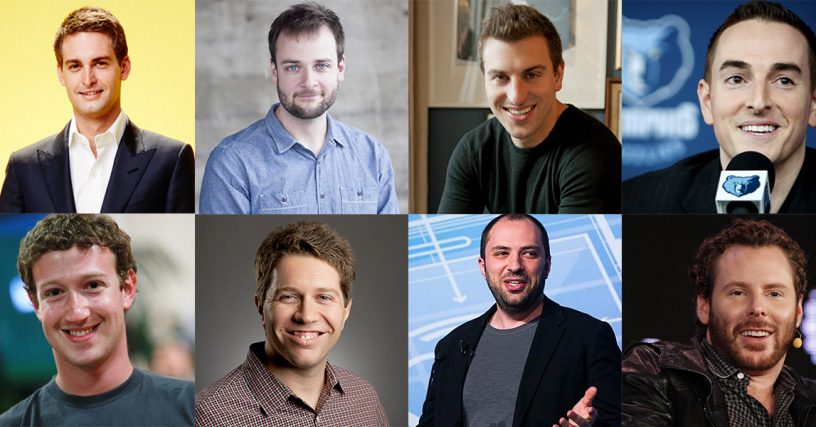 Throughout the world and across a variety of industries, millions of people are working to develop new companies and build them into successful global ventures.

But what does it take to build a successful new company? What does success even mean?

Here, we look to the young founders of hyper-successful startups to try and reach an answer, or at least, to begin to ask the right questions.

The co-founder and CEO of Snapchat, 26-year-old Evan Spiegel created the messaging app while still a student at Stanford University.

An entrepreneur in a league of his own, Mark Zuckerberg, now 32, launched Facebook in 2004 from his dorm room at Harvard University. The rest is history.

A graduate of the University of Chicago and Columbia’s School of Architecture, 34-year-old Evan Sharp co-founded Pinterest while working as a product designer at Facebook.

Mike Cannon-Brookes, 36, founded enterprise software company Atlassian along with Scott Farquhar in 2002. The pair are often referred to as “accidental billionaries,” as their only hope in starting the company was to earn the average starting salary without having to work for a large firm.

Brian Chesky, 35, started Airbnb in 2007 after having trouble affording increasingly expensive San Francisco rent. After learning that all the hotel rooms in SF were booked during a popular conference, Chesky and his roommate put their apartment up for rent online, sparking a revolution.

At 16, the FBI raided Sean Parker’s house for hacking into a Fortune 500 company. At 20, Parker founded Napster with Shawn Fanning. At 25, Parker became the first president of Facebook. After working to revolutionise multiple industries, Parker now focuses his efforts on philanthropy and investments.

Many may recognise Robert Pera, 38, as the owner of the Memphis Grizzlies (an NBA Basketball team), but his true achievement has been building Ubiquiti. Ubiquiti is a global wireless communication company currently worth over $4 billion.

Jack Dorsey, 39, came up with the idea for Twitter while a student at New York University, but waited for years, until 2006, to launch the service. He couldn’t stop and followed up with mobile payment app Square in 2010.

The oldest entrepreneur on our list, Jan Koum, 40, founded the cross-platform messaging client WhatsApp in 2009. The service has now grown to over one billion users.

The REAL Reason They Call Us The “Strawberry Generation”
6 Secrets To Fighting Without Killing Each Other (Or The Relationship)
To Top
Loading Comments...
Comment
×