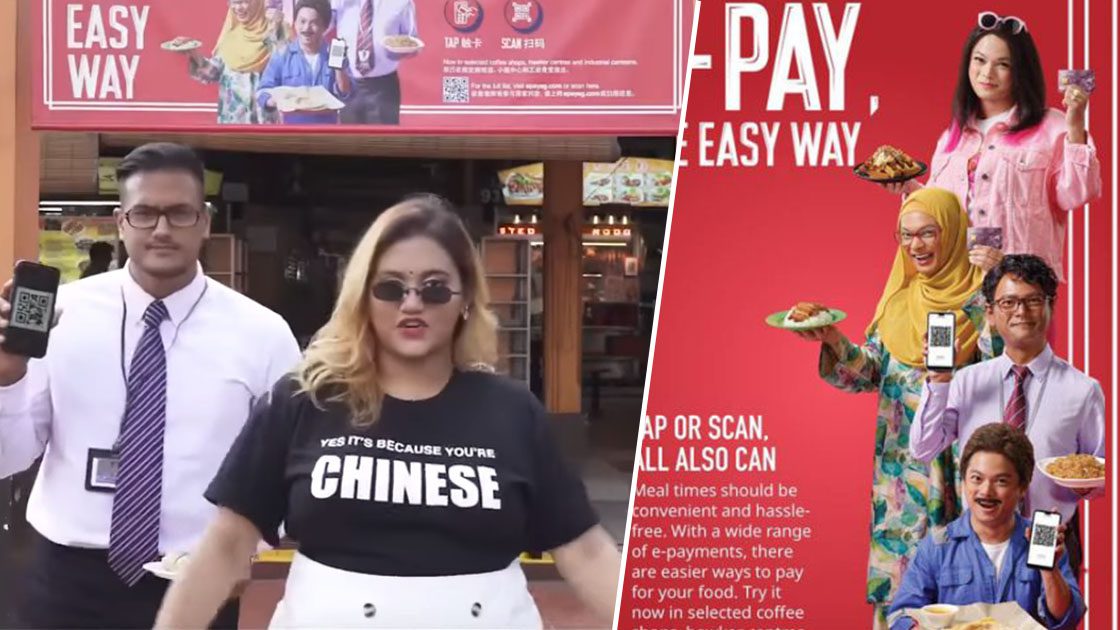 It’s been a week since the infamous E-Pay ‘brownface’ advertisement got called out for its portrayal of local artiste Dennis Chew as members of other races. The issue of racism has escalated since then, fuelled on by the chain of events that followed after: Preetipls’ K Muthusamy video, the apologies from each party, and the involvement of the Info-communications Media Development Authority (IMDA) and Ministry for Home Affairs (MHA).

A lot has been said and done. There’s a lot of anger among Singaporeans and a lot of criticisms being thrown around at all the parties involved. But with so many people weighing in on social media, the discussions have—although well-intentioned—turned into just a whole shedload of noise.

What Are We Arguing Over?

The entire saga has been blown out of proportion, to a point where many are just cherry picking behaviours they agree with and finding fault with parties they disagree with. It’s encouraging to see more Singaporeans getting involved in discussing a topic so close to our hearts, but it has also shown how ugly and bitter we can be with handling opposing viewpoints.

The ad creators (Havas Worldwide Singapore) has since removed the contentious ad and released their apology statement. Despite the apology however, people still weren’t pleased.

The main gripe is that it is hard to understand how the ad creators could make such a mistake, especially since Mediacorp was already fined once for a similar incident in 2017. To most people, it also shows a cavalier attitude towards racism, which is highly unacceptable, particularly for groups of people whose actions have an impact on the masses.

However, the fuel that sparked a greater divide was Preetipls and her brother’s rap video. While it was ostensibly understood to be a satirical parody video meant to depict the casual racism that minority groups face in Singapore, the way it was delivered only attracted the ‘wrong’ kind of attention.

IMDA stepped in to call Preetipls’ video to be removed and MHA criticised the video, as well as the Nair siblings’ apology for being ‘mock’ and ‘insincere’.

However, when IMDA and MHA stepped in, it was seen by many people as a move by the government to silence discussions. Judging from the comments one can find across social media, some also see this as a move for the government to take the side of the ad creators, since the Nair siblings seem to be receiving more flak from the authorities than Havas, or any parties involved in the production of the E-Pay ad, are getting.

Let’s first establish that whether it’s the ad creators, the Nair siblings, the authorities, or any politician, I believe that whatever they have said or done are out of good faith.

However, we also have to acknowledge that these individuals could have done better in addressing the situation, especially when there’s an increasing need to be even more racially sensitive.

No Point In Invalidating Each Other

For one, none of us should invalidate any of these parties’ experiences.

In the case of the Nair siblings’ video and subsequent apology, many people fought for and against them.

Those who supported them felt that despite the seemingly offensive lyrics against the majority Chinese race, the video was just an edgy way to get people to listen to the grievances of minorities. And for one to take offence would mean that one is being overly-sensitive, or not being able to take self-deprecating humour.

Though objectively, the lyrics alone were more offensive than respectful or meaningful. One can replace the race with any other race and it will be equally offensive.

Likewise for Preetipls as an experienced content creator, it should be known the kind of power that content (especially on social media) has on people. And it is quite clear that a content that literally raps about a certain race always “f***ing it up” would only create a greater divide among the racial groups.

On the other hand, it’s no secret that there’s racism in Singapore and we must acknowledge that the Nair siblings would have had their share of unpleasant race-related experiences to have come up with what they had.

Knowing the motivations that all parties have in this saga, I respect the right for the Nair siblings to want to raise awareness on the issue, but I disagreed with her video because even if it’s satire, there are better ways to get the message across.

Yes, being controversial will get people to listen, but it is different altogether when it is fodder for more contemptuous remarks against each other.

And on that part, perhaps IMDA and MHA could have done better when they first stepped into the picture. There’s long been displeasure with the government, and their heavy-handed approach of immediately denouncing and calling for the video to be taken down without first acknowledging the experiences the Nair siblings had only gave people more reason to criticise them.

Should IMDA Have ‘Clamped Down’ On The Video?

However, when you put yourself in the shoes of a ministry, especially one whose vision is to “make Singapore our Safe and Secure Best Home”, it is a tough decision that needs to be made. For a country that has spent the last 50 odd years trying to build a racially harmonious society, I’d say we’ve done a pretty good job in cultivating a society that respects each other as fellow Singaporeans.

But there’s also a very important need to acknowledge that yes, there are many little nuances in our society, like casual, but hurtful racist remarks, that affect people. I am not a minority and I cannot speak for them on the kind of racism they face, or how they truly feel about casual racism. But what I do know is that race and religion issues are very close to each of our hearts, and if not handled properly, is something that constantly threatens to divide us.

And for MHA, this is a serious matter. Singapore cannot afford another racial riot. In Minister’s Shanmugam’s latest Facebook post, he also elaborated on Racism and the reason behind his stance on the saga involving Preetipls’ video: “If everyone starts discussing race and religion in the way they did, then you will in fact get more racism, not less.”

I spoke to 20-year-old Hafez, who facilitated the first Youth Conversations session on Race and Religion last year. A Persian who has had his share of unpleasant brushes with racism, shared how even though the E-Pay advertisement was “done in poor taste and was inappropriate for our Singaporean context, the lyrics, gestures, and insinuations used in the Nair siblings’ rap video could hurt people and cause more racial tensions.”

“At the same time, it can lead to a normalisation of trading insults and slurs between people of different racial groups, seeding resent and unhappiness between friends, neighbours, and strangers.”

We are nowhere near the extreme racism that minority groups in other nations face, but what minorities face here, are these little but equally important microaggressions that potentially create an “Us vs. Them” mentality.

There’s no winner in fighting to pin the blame on someone. All of us know that there’s a certain degree of ‘wrong’ in all that has happened, so instead of harping on the ‘wrongs’, we can do better in figuring out what we can do moving forward.

As much as there are many people making a lot of extremely one-sided and downright revolting comments online, majority of Singaporeans are actually hopeful for a racially harmonious society, and are very receptive to helping us achieve that.

Perhaps this also comes apt as we are counting down to another national day. We are reminded of how delicate maintaining the peace is, in the sense where one insensitive remark or behaviour can threaten to put Singapore back 50 years.

Hafez added, “I encourage everyone to join the conversation on race and religion; but do so in a manner that actually forwards a good intention for Singapore.”

There will always be some people who are simply racist and for them, there’s nothing we can do. However, I truly believe that many are either not aware of how their comments are hurting another individual and just require more exposure on how to be racially sensitive.

And because these are issues that are so close to our hearts, the power is in us to control the narrative. Nobody with enough power could have said or done the ‘right thing’ that appeases every side but how we choose to move on, stronger together, lies within us.

Also read: ‘I Converted To Christianity And My Muslim Friends And Family Condemned Me’.

Discussing Death – If Life Is A Journey, Why Are We Scared To Talk About The Destination?
Why We Love, And Yet Love To Hate On Singapore
To Top