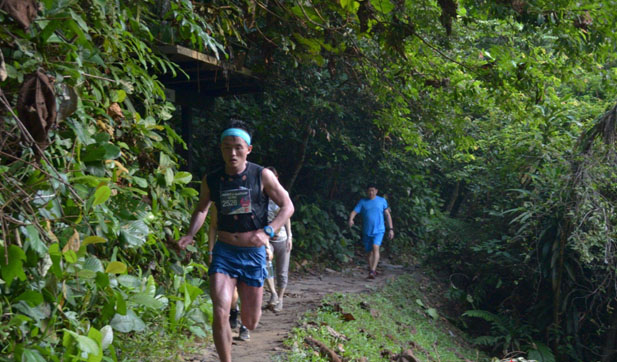 This article contains an image that some may find disturbing.

Running. This word, synonymous with everyone for a sports activity that requires a certain amount of endurance and physical capability. To me, it means so much more.

There is a love-hate relationship whenever it comes to sports in Singapore, especially running. People with busy lives would see it as an act of healthy living, and do it for the sake of keeping healthy and striking bucket lists off by completing a marathon once in their life. Those bordering on the edge of insanity do it for more than living; bragging rights, personal bests, medals, finisher tees and even podium positions.

For me? Running edges on irrationality and a particular quest. A quest to live. A quest to be better than who I am today, and what I was yesterday and many yesterdays that have passed.

Growing up as a primary school student, I hated sports and any activity that required me to have a certain level of physical endurance. That resulted in my obesity and chubbiness at a young age.

When we’re at that age, we are ignorant of things that happen beyond our scope of understanding. Things like cancer, life and death, and also sometimes, our future.

As I entered my teenage years, I started to become more self-conscious. I started to realise every change on my body, and was always wishing I looked a little bit more handsome than that guy who has all the girls at school swooning over.

Then, there was one particular change that made a huge impact on my life, even until now. ‘Cold sores’ and ‘white patches’ started appearing on my body, especially on my thighs, hips and back.

I initially thought these ‘odd patches’ were nothing more than puberty taking charge of my body, but I was so wrong.

Living in a body that wasn’t living up to me

Those sores started to graduate into fungus-like plagues and scars on the majority of my thighs and hips. My skin started to flake and became overly sensitive and extremely dry—like the Sahara Desert. The white patches on my body multiplied faster than you can say cell division.

Following the advice of my aunt, I went to the doctors to find out what I really had.

After a few weeks of going back and forth with several consultations, blood tests and biopsies, I finally had a semblance of what I was suffering from.

I guessed my aunt thought I was too young to understand and kept it from me, passing it off as a severe form of psoriasis or ezcema and only wanted the best for me. I went through several sessions of phototherapy—a therapy that involves being in a chamber where UV lights penetrate your skin.

My skin seemed to get better with each session, but the side effects were obvious. I hated going to each and every session because it was troublesome to travel to after school. I was missing classes and couldn’t do the things I wanted to do like playing games and hanging out with my friends. I suffered from fatigue, migraines, and my skin started becoming extremely sensitive.

All of that happened while I was still just a teenage boy, and I thought nothing of it. I decided not to go ahead with the sessions as that took the life out of me. I brushed my condition off as something that would get better and disappear with age.

I continued to do what I love; I played hockey for the school and national teams, and did well enough in my O-levels to get into the polytechnic and course that I wanted, and life picked up for awhile.

I felt that life was only just beginning.

Exempted from NS—Am I a ‘lower-class citizen’?

Polytechnic was a blast. I made friends who even till today, are the bestest ones I can ever ask for. I went through experiences that I will go through again in an instant if I can rewind time.

After graduation from polytechnic, I was preparing for my next stage of life—National Service. I had high hopes and expectations for myself; to serve the country I was born in and that has given me so many opportunities, and to also give back to my father who has sacrificed much for my well being.

The first hiccup occurred during the compulsory medical check up at CMPB (Central Manpower Base). The medical officer wanted to give me a PES D and go for further check-ups at a doctor to make sure that I can serve, but I refused and begged for him to give me a better PES status. Maybe it was my ego, or maybe pride, but I didn’t care about my skin condition. I just didn’t want to be judged as a person attempting to escape military service.

All was well, until the month before my enlistment date.

My mother being the worrywart she was, came to me in tears telling me to go back to the doctors as she didn’t want to see me suffer. Upon her request, I went through the same troublesome processes again—consultation, biopsies, blood tests, and finally, I got my diagnosis.

It was from this diagnosis that finally revealed that my condition has advanced to a stage where it was cancerous. Even so, I wasn’t bothered by what I heard, and I just wanted to continue with my life.

Everything happened in an instant and things started moving very quickly. On the same day of the diagnosis, I received a doctor’s letter stating that I was unfit for military service due to a life-threatening condition.

Majority of guys at that age would be joyous to be exempted from NS. They’d feel happy for not having to ‘waste two years of their lives’ doing something they never wanted, but I was devastated. My future plans got derailed, and I didn’t know what I wanted to do with my life.

I felt like a totally different person as compared to others, and I felt like a lower-class citizen. What kind of stories would I have to share with friends and family in the future?

For a while, I felt really lost. I was dejected and I wished I knew people who was in the same boat as me, feeling what I felt.

I was physically fit, but medically unfit—a term that a majority of people in Singapore fail to understand.

What can I say?

It was so hard to have to explain the situation to others when I was already finding it hard to accept it myself.

After a long and hard struggle with myself, and with constant support from my closest friends and family, I came to terms that I will never be ‘normal’. I realised I was born this way, and everything happens for a reason, and that we just have to understand and respect that particular reason, no matter what it may be.

Everything happens for a reason

I took a gap year from the everyday stresses of life to find out what I really wanted to do. I worked part-time, travelled, relaxed, played games, but most importantly, I continued with my passion—running.

Things started to fall into place. I got accepted into university and was the very first batch of full-time students in SUSS. I completed more marathons, races, and became faster and better. I found a part-time job which paid well and made friends with some amazing colleagues and bosses that I will never forget.

People who don’t know me judge me for being exempted from NS, for being a ‘chao keng’, but that’s okay.

People avoid me once they see the scars and plagues on my thigh thinking that they are contagious, but that’s okay too.

People chide me for making unconventional decisions, thinking that my dreams are impossible, but that’s fine as well.

At times, my thoughts stray because I get the feeling like I am a huge burden to everybody because of my condition, as I am unable to do the everyday things that normal people do.

But do I just want to be normal?— I’d give anything to be.

And that is why I run.

15 marathons and a few ultramarathons later, I found out that the people who mind, don’t matter and the people who matter, don’t mind. I am really thankful for having awesome friends and family providing all kinds of support in the crazy pursuit of my dreams.

Who, or what do I run for and why?

We are but creatures of passion, driven to achieve beyond the norms.

Right now, I am living the best life that I can ever have. I work in a full-time job that utilises the best of my abilities, and fulfills the things I have always wanted to be and do in life. I am a coach, a tour guide, and managing the operations of a small company.

Everyday, I know how fortunate I am to have people around me who accept me exactly as I am.

I have an amazing girlfriend who provides me with all kinds of support—emotionally, physically and psychologically, and that is something I am forever grateful for. And I am more than grateful for a family who lets me figure out my life and supports me through my journey.

Because of all the support that I have, I have embarked on a quest that seems achievable and easy for a majority of my running friends, but near to unattainable for me due to my skin condition. I fatigue easily, I don’t recover as fast as others, I don’t perspire (which is extremely dangerous because my body doesn’t get cooled and that results in heat injuries) but that won’t stop me from trying.

The quest to break the 3-hour marathon barrier.

I don’t have anyone to prove to but myself. Excuses are plenty, but I love to find that one reason why this matters to me.

We want to prove to ourselves that limits are meant to be broken, and that cancer is just another limit in life that is waiting to be broken through any means possible. Because to earn the best days in life, we have to fight through some bad days to know that it is going to be worth it in the end.

This article is contributed by Goh Chang Teck.
All images used in this article are provided by the contributor.

Also read: Kicking The Habit – My Struggle With Quitting Smoking.

(Header Image: adapted from an image provided by the contributor)

The Dew Behind #DUNSTOP – How He Lost 18.5KG And Inspired A Fitness Movement
Fighting For Control — How I Dealt With 28 Personalities Within Me
To Top