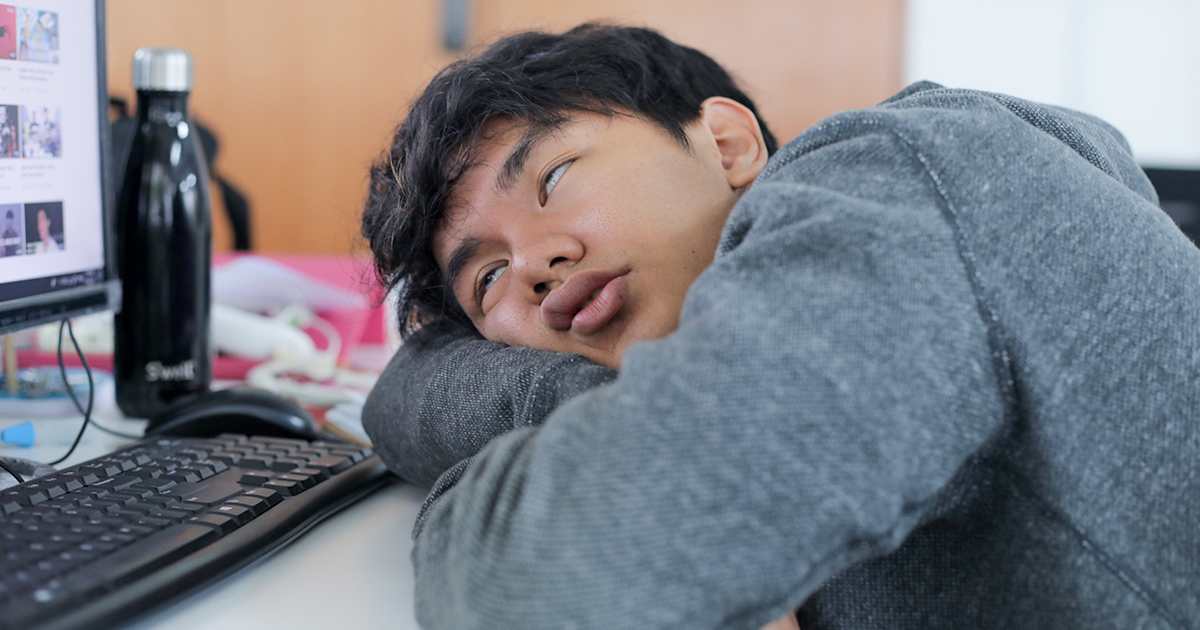 “I have a good work-life balance. Everyone in my office knocks off at 5pm (or 6pm) every day.”  – Said no one ever.

Singaporeans are overworked AF – We clocked in the longest working hours in the world in 2017. On average, Singaporeans work 45 hours a week.

To most of us, 45 hours do not seem like a lot, but it’s because we are so used to such working hours. In fact, staying in office way beyond our ‘official working hours’ or working overtime (OT) is considered a norm today.

Granted, there are those who work till late because they are really swamped with important deadlines. However, many Singaporeans OT also because of the societal pressure that dignifies OT, making it seem like one needs to OT to show their dedication to the company.

THE PRESSURE TO STAY BACK

I recently came across an Instagram story a friend, Jason*, posted. In it, he shared about how he had left work at 6pm sharp, only to have one of his colleagues pass a snide comment at him, “wah today go home so early.”

That comment may very well be passed off as a joke, but that wasn’t the first time Jason’s colleague made such comments. It happens every time Jason leaves work on time and it shows an underlying problem that is apparent in our work culture.

It’s worth noting that Jason gets to work at 9am, finishes all that is required for the day and leaves the office between 6pm to 6.30pm regularly. So on that fine day, Jason finally gave his snarky colleague a comeback, “Oh, hahaha, but I also come to work on time.”

But this story isn’t about giving snarky people a taste of their own medicine, it’s about the unhealthy association we have with working OT and employee’s value.

As if an outlet that everyone was waiting for, Jason’s story received an outpour of positive replies from friends and followers who had also experienced similar situations.

“Going home on time isn’t a crime and OT-ing isn’t a prize.” Truer words could not have been spoken. Clearly, Jason isn’t alone in this.

Most of us have been in Jason’s position at some point of our career. Somehow, we feel obliged to stay back beyond our designated knock off time, especially when everyone around us seems to be glued to their seats.

In fact in our society today, staying back late is deemed a positive trait. It’s not surprising for bosses to have the impression that an employee OTing in the office till 10pm is a hardworking one. When did staying late at work translate to employee dedication or value? And who’s to say employees don’t use that mentality to their benefit, exploiting it to show their “dedication” for their work?

Contrarily, no one would instinctively think of an employee who leaves office on time as an A-star employee.

Because of such workplace beliefs, we feel paiseh to be the first one out the door. We choose to stare at our screens in the office just because our other colleagues are doing so. Of course, I’m not implying that everyone OT for that sole reason because some really do have to get shit done. However, many of us have been a victim to this guilt and the fear that we will be looked down upon.

It’s a worrying mindset to have and kind of sad. Instead of prioritising productivity and good time management, we tend to patronise employees who leave on time and favour those who stay late, even if it could mean that they lack the two aforementioned skills.

This unnecessary societal pressure is further egged on by something that is innately Singaporean: our “kiasu” mentality.

We always want to be better than the person next to us. It’s a national sport to be competitive and this mentality manifests itself in the hours we put into work. It cultivates an unhealthy showcase of competition where everyone wants to show that they’re putting in equal, if not more effort than our peers.

If we weren’t all caught up in the rat race, there wouldn’t be a need to do OT just to prove our worth in the first place. Ask anyone to choose between work or family and friends with the context that their livelihood isn’t a problem and chances are most will choose family and friends.

A survey from 2016 showed that about 50% Singaporeans said they don’t spend enough quality time with their family. With figures like these, it’s no surprise that Singaporeans constantly look like they’re in need of a Red Bull.

I know that we millennials like to think that we’re invincible and while we’re still young, we see the need to strive and work harder for better days. But everyone needs work-life balance.

Not only does staying late affect our social life, it affects our physical and mental health. Working late into the night and waking up at 6am or 7am the next day for work again is only going to leave us drained. Besides, we’ve seen the many research studies that link stress and fatigue to decreased productivity.

Even our eyes need a break from the computer screen every 20 minutes. We need to give our minds and a body a break. The less rest we get, the less productive we’ll be at work the next day, which leads to the need to OT and the vicious cycle repeats.

Do we really want to live our life in an endless loop of feeling stoned? I certainly don’t want to go about my life like ‘the working dead’.

We are human beings after all and the stress and mental fatigue that build up with constant OT should not be taken lightly. ‘Death from overwork’ is real – after clocking in more than 100 hours of overtime in a month, Matsuri Takahashi killed herself at the age of 24, and hers is not the only case in Japan that have been ruled ‘death from overwork’.

I’m thankful that the situation in Singapore isn’t as drastic, but I also hope we never have to see that headline on local news.

WORK-LIFE BALANCE DOESN’T HAVE TO BE A MYTH

Many of us today believe that work-life balance is simply not possible. “No such thing one lah!” We say.

On the other hand, I have friends in countries like Australia, who tell me how they are blessed with employers who encourage them to leave work on time. One of them even shared that her employer had told her to go home two hours early because she had finished what she had to do for the day. Holler at me if you find an employer who would do that in Singapore.

Working hours were made to be 8 hours for a reason. Whether it’s to make sure people don’t go insane from work or whatsoever, there’s no need to stay back in the office unless we really need to – like to complete urgent projects or client deadlines that we die-die have to finish.

Remember that at the end of the day, we work to earn a living, but is it worth it to be only living for work?

It’s cool if you want to be a Jason. If you’re done with work, go forth and leave the damn office when the clock strikes six. And if your bosses don’t seem to comprehend the concept of productivity and that you are human, you can decide if you’re paid enough to sell your life to work.

And if you’re someone who likes to take a lot of breaks during the day because you just work better at night, that’s great too. Just, maybe, refrain from being condescending to those who leave on time.

*Name has been changed to prevent the individual from losing his job.

Also read: “It’s Just My Job” – Not All Insurance Agents Are Annoying Assholes

An Afternoon With A ‘Handphone Shop Ah Beng’: “My Mum Said That I’m A Disgrace”
A Nation Of Unappreciated Achievers: Why Our Local Talents Need More Love
To Top