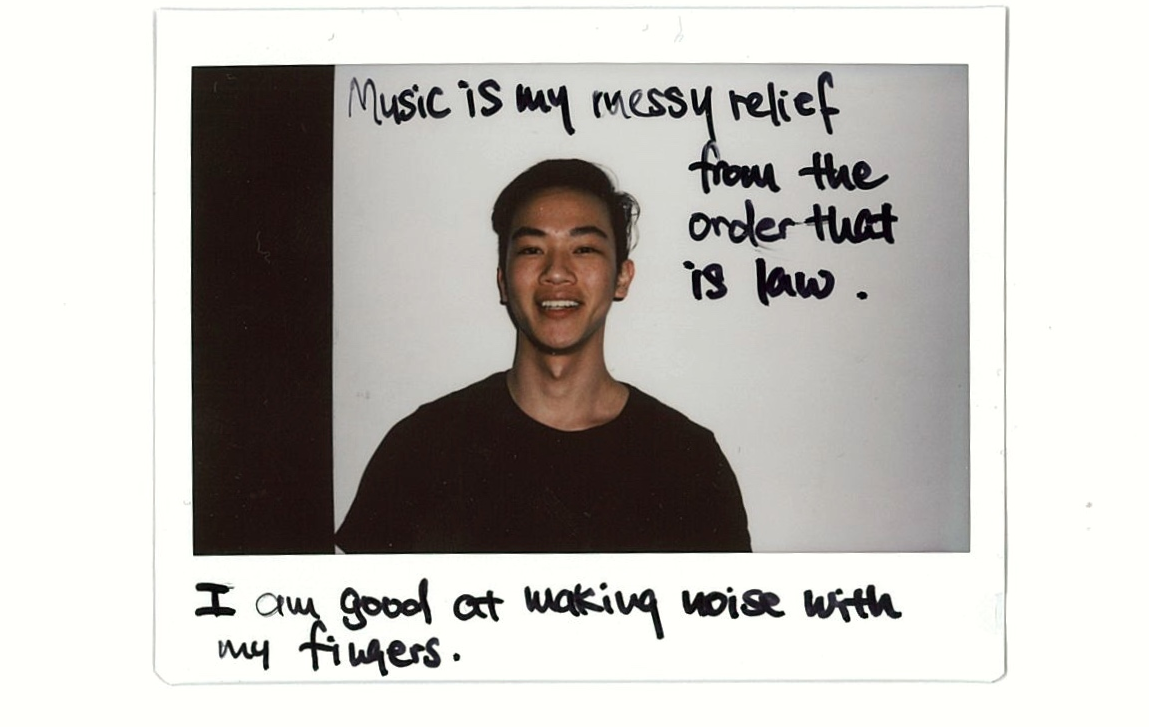 By day—at least when school’s in—he spends his time with his head down in readings, pursuing a double degree in Law and Liberal Arts at the National University of Singapore and Yale-NUS College respectively. By night, he plays the guitar in 4-piece local music act Sphaeras, with bandmates Zakhran Khan (drummer), Axel Serik (bassist) and Wun Chun Kit (guitarist).

Since its humble beginnings in mid-2013 as an accidental project of four musicians who met online and who desperately wanted to use music to express themselves, Sphaeras has played several local gigs and venues, including Baybeats and at the Hard Rock Café. They’ve collaborated with numerous local and international acts including Weish and Brazilian Odradek, and to date, the band has released two albums.

Haokai’s love for music and his band is plain to see. Despite them each having highly busy schedules—Zakhran studies architecture, Exel is a freelance music producer and photographer, and Chun Kit is a freelance sound engineer—they make it a point to jam at least once a week. Aside from a passion for music, he’s also very interested in law.

“On an intellectual level, law is attractive because it provides a neat and systematic way of formulating arguments,” he shares. “Having a legal mind can help me better navigate the rules of society.”

Music and law—an odd match, it might seem. But Haokai doesn’t see why it has to be either music or law. He seems to have found a sweet spot right in between, describing the two as “complementary.”

Through a rigorous law training, he’s learned to be disciplined and sharp, although over the years, he’s discovered that you can’t put a hard deadline on creativity. “I approach music at my own pace. I am more productive and creative that way.” Not only has he conditioned himself to be a consistently hard worker, he’s also learnt to ‘switch off’ from time to time, and to lose himself in music—something not a lot of us know how to do in this relentlessly fast-paced hubbub we call Singapore.

What do you love about music?

It engages me unlike anything else. It’s the only medium that allows me to forget any trouble temporarily, while recharging me at the same time. Nothing quite compares to the feeling you get when you discover a band or an artist that’s ground-breakingly ingenious. It also adds flavour to life, which explains why I’m almost always plugged in while doing work.

What goals do you have for music and Law?

For music, my band intends to do more tours in the coming years. We have released two albums thus far that have received considerable acclaim worldwide, but a digital release is very different from playing live shows. We have fans from various countries across the world requesting for us to play in their hometowns, and we hope to bring our music to them live when the time is right.

For law, I’m just trying to learn as much as I can both in law school and through internships. Being new to the game, I’m still trying to feel it out and gain as much experience as I can. In the long run, since music plays an indispensable role in my life, I hope to be able to find an area of law that can reconcile with my interest in music e.g. entertainment law, copyright law, etc.

Describe managing both music and Law. How do you manage them both?

I won’t pretend that I’m excellent at managing my time. In fact, I’m a terrible procrastinator. However, I am very clear about my priorities, and music and law are both high up on the list. This way, it disallows me from being distracted easily. I would often pass up social occasions to devote more time to things that matter more to me.

Do you think you’ll ever come to a crossroad where you’ll have to give up one of your passions? How will you choose then?

I don’t think I’ll ever have to give either up, as hard as work gets. I think, initially, when I enter the work force, music might have to take a temporary backseat for me to focus on building my career, at least in terms of playing less shows. Nonetheless, I’m merely pressing the pause button and don’t foresee music leaving my life completely. It has and will always be an essential part of my life, both as a listener and a musician. I see myself attending shows and supporting the local scene as best I can; or simply coming home to my guitar set-up and jamming for half an hour after work.

Do you have any fears and hesitations when it comes to music?

Not at all. I think from the start I’ve had a clear picture of what music means to me. It is simply an outlet for me to unwind and express myself creatively. Music has not disappointed me thus far, but continues to inspire me and pull me out of my darkest moments.

Yong Heng, Creator Of Limpeh Says, On Singapore Culture And Self-Censorship
Daryl, Author Of Kappa Quartet, On Being A Novelist In Singapore
To Top
Loading Comments...
Comment
×